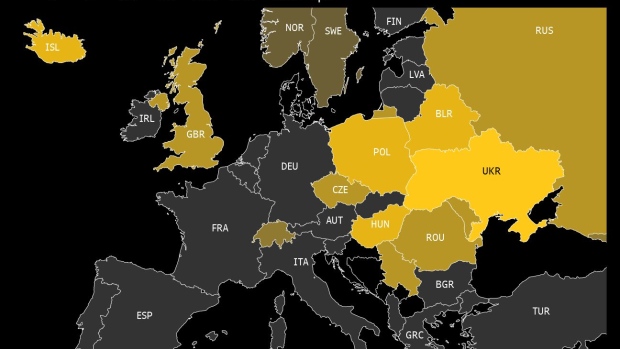 (Bloomberg) -- Iceland’s central bank raised borrowing costs again by a full percentage point to a five-year high, doubling down on its struggle to curb inflation and cool one of Europe’s hottest housing markets.

The 7-day term deposit rate was lifted by 100 basis points to 4.75% on Wednesday, a move that was a quarter-point more than forecast by the north Atlantic island’s two biggest lenders, Islandsbanki and Landsbankinn. It’s the second consecutive increase of that size.

“The MPC considers it likely that the monetary stance will have to be tightened even further so as to ensure that inflation eases back to target within an acceptable time frame,”  officials said in a statement. “Price hikes are widespread, and underlying inflation has risen. Inflation expectations have risen by most measures and are above target.”

A housing boom that has seen prices rise by 147% between 2010 and last year -- the most in the region -- is showing little sign of easing despite Sedlabanki being the first central bank in western Europe to tighten since the onset of the pandemic.

Policy makers hiked rates six times before this week to try to cool inflation which includes real-estate costs in the nation’s basked of measurement.

Islandsbanki and Landsbankinn expect the housing market to grow about 20% or more this year, with some “calming” thereafter. They project the central bank’s policy rate will be raised to as much as 6% by the end of 2022.

In a bid to ease housing shortages, the government is drawing up plans for a deal with municipalities. It would envisage building 4,000 new apartments annually in the next five years, and 3,500 for the following 10 years, according to Infrastructure Minister and former premier Sigurdur Ingi Johannsson.