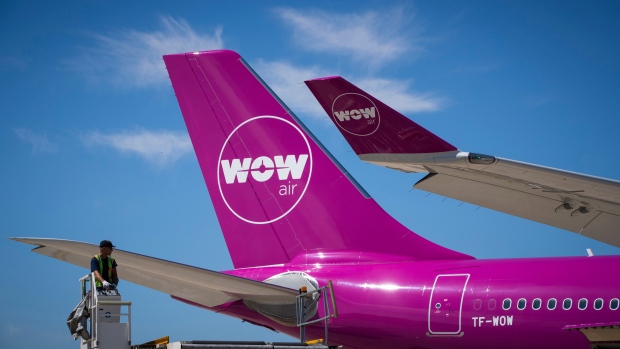 On Thursday, Wow Air announced it will cease operations and cancel all flights after failing to attract funding to keep covering its losses. Founder Skuli Mogensen, a former tech entrepreneur, had tried everything – including a sale to flag-carrier Icelandair, which he had once mocked as a dinosaur. But those talks fell through, and so too did negotiations with U.S. private equity firm Indigo Partners.

Founded in 2011, Wow Air grew rapidly. Last year, it accounted for a third of all seats on flights to and from Iceland, up from 15 percent in 2014. It exploited the country’s convenient geographical position, offering flights between European and U.S. airports for as little as $99 with a connection at Reykjavik’s Keflavik airport. Last year, it was the second biggest low-cost carrier on transatlantic routes after Norwegian Air Shuttle ASA, with 1.6 percent of seats.

Wow Air’s business model was bold: Fly a young, fuel-efficient fleet of single-aisle planes, fill them to capacity with passengers squirming in uncomfortable seats, skimp as much as possible on service, and fly to relatively cheap U.S. airports (Wow’s last flight was to Detroit). The Icelandic company’s fuel efficiency per passenger on transatlantic routes was second only to Norwegian.

Given that flights to and from Europe across the Atlantic generate by far the highest yields per passenger, there is room for volume plays by low-cost entrants. Companies have kept trying, with varying results: Denmark’s Primera Airlines ended operations last year, but International Airlines Group SA’s Level, founded in 2017, and France’s Bee, launched in 2016, are still around.

For an airline operating with wafer-thin margins, even a sustained run of high fuel prices can be an existential threat – but Wow probably wasn’t killed by any adverse external circumstances. Its reputation for poor service and travelers’ negative experiences of unexpected surcharges and ignored complaints prevented it from attracting business travelers. Flights to secondary U.S. airports were also far less lucrative than the key London–New York route. Increased competition also played a part as Icelandair started to operate some of the same routes. Faced with losses of $45 million between July 2017 and June 2018, Mogensen tried to pivot from the U.S. to Asia – but it was already too late.

Wow's collapse will be no tragedy for the industry: the wider transatlantic market will barely notice the drop in the number of seats, and prices are unlikely to jump amid strong competition from Norwegian and Level.

For Iceland, though, the airline’s collapse is a severe problem – made all the worse by the losses Icelandair has also racked up since the flag carrier tried to compete with Wow.

According to the latest figures, January passenger traffic at Keflavik was down 6 percent year-on-year. That bodes ill for Iceland’s economy, which has come to depend heavily on tourism as it tries to rebound from its own financial crisis a decade ago. In 2017, tourism’s share of Iceland’s export revenue reached 42 percent, compared with 26 percent in 2013.

In the 12 months between March 2018 and February 2019, some 685,000 people visited Iceland from the U.S., a jump of 18 percent from the previous 12 months. Without that growth, tourism to Iceland would have fallen. And, with bargain-basement airfares to Reykjavik no longer available to Americans, that growth is likely to peter out.

That’s an important reason why Iceland’s official statistics agency is predicting growth in economic output will be only 1.7 percent this year, compared with an average of 4.4 percent in the last five years.

“The outlook for foreign trade is weaker than in the last forecast, due to greater uncertainty in tourism and a contraction in the supply of flight offerings to the country,” Statistics Iceland wrote in a late February release.

With Wow’s collapse, that uncertainty is morphing into an ugly certainty. Small, open economies, as Iceland knows only too well, are easily derailed by bold, expansionist business projects that don’t go to plan.