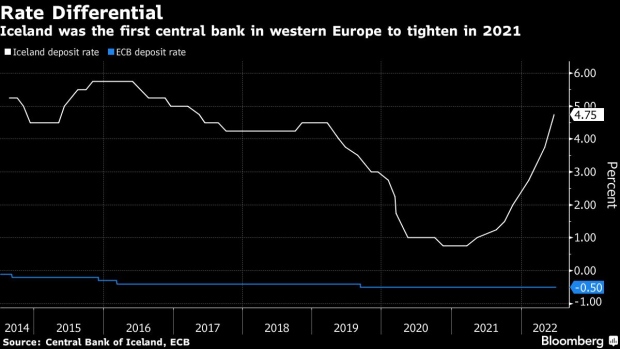 Iceland’s central bank governor, Asgeir Jonsson, said he would welcome a course of interest rate hikes by the European Central Bank as the Nordic island nation mulls its own further tightening to tame inflation.

“That would make our life easier,” Jonsson said late Monday in an interview in Dubrovnik, Croatia. He praised the US Federal Reserve for its accelerated pursuit of rate increases and cited hopes that the Frankfurt-based ECB follows suit after this month.

Any action from the euro area would help policy makers in Reykjavik as they seek to curb inflation fed by rising demand for housing in the nation of 376,000, a boom that shows little signs of abating, he said.

“We are a small, open economy,” Jonsson said. “We import inflation.”

Iceland’s monetary authority raised rates by 100 basis points in May and repeated the measure in June, bringing the 7-day term deposit rate to 4.75%. The move by Sedlabanki, the first central bank in western Europe to tighten its monetary policy since the onset of the pandemic.

The ECB plans to start tightening rates later his month, most likely with a quarter-point rate hike.

Jonsson reiterated that Iceland would raise rates again if needed. Annual inflation is expected to reach 8.8% this year, but without factoring in the housing prices it would remain at about 6%.

“It’s very likely we’ll have to do some more hikes, as we want to prevent the second-round effects of inflation,” he said. “But we took two very large steps in May and June, so we are now waiting to see some results of this.”

The central bank next meets at the end of August.