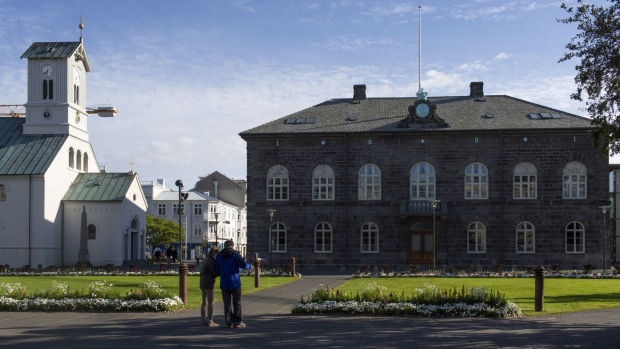 Tourists stand in front of Iceland's parliament, the Althingi, right, and Domkrikjan, Reykjavik's cathedral, in Reykjavik, Iceland, on Sunday, July 19, 2020. Foreigners returned to Iceland on Monday after a hiatus imposed by the Covid-19 outbreak, in a welcome sign for an island nation whose economy is reliant on tourism. Photographer: Sigga Ella/Bloomberg , Bloomberg

The conservative Independence Party is in the lead, as expected, with 26.5% support, according to an early vote count presented by public broadcaster RUV. Its coalition with Prime Minister Katrin Jakobsdottir’s Left Greens and the agrarian Progressive Party is headed toward a combined 37 seats in the 63-seat parliament, the Althingi. As many as nine parties are likely to enter the legislature.

The land of fire and ice, which provided the stunning backdrops to Game of Thrones, has sought to diversify its economy to avoid the repeat of recent boom-bust cycles. Tourism soared in the past decade to become the growth engine after the 2008 financial crisis triggered a collapse of the country’s outsized banking sector.

Similar to neighboring Norway, which also held elections this month, concerns over global warming emerged as a campaign theme, with the anti-establishment Pirate Party seeking carbon neutrality for Iceland by 2035, five years ahead of schedule.

The traditionally dominant Independence Party, led by Finance Minister and former premier Bjarni Benediktsson, wants Iceland to become the first fossil fuel-free nation -- but is less ambitious in its climate goals compared with other parties.