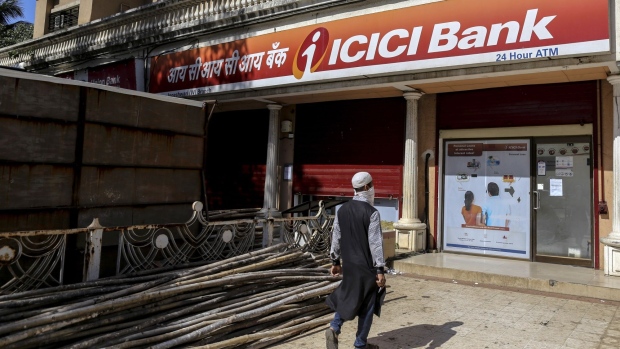 A customer covering his mouth and nose approaches an ICICI Bank Ltd. branch in Mumbai, India, on Monday, May 4, 2020. India's central bank Governor Shaktikanta Das and the chief executive officers of the nation's banks have discussed ways to ensure credit flow to businesses once the world's toughest stay-at-home order ends. , Bloomberg

(Bloomberg) -- ICICI Bank Ltd.’s profit in the third quarter rose 25% from a year earlier, helped by interest earnings from lending as the impact from the coronavirus pandemic eased.

Net income was 61.9 billion rupees ($832 million) in the quarter ended December compared with 49.4 billion rupees a year ago, the company said in a statement to the stock exchanges on Saturday. That beat the average estimate of 58.6 billion rupees from eight analysts in a Bloomberg survey.

ICICI, which provides most of its loans to the retail sector, has been growing rapidly, helped by mortgage and car loans. India’s second largest private lender joins other banks such as HDFC Bank to ramp up lending.

Still, a new wave of coronavirus cases has led to concerns over the sustainability of consumer demand, although the central bank believes any impact could be short-lived.