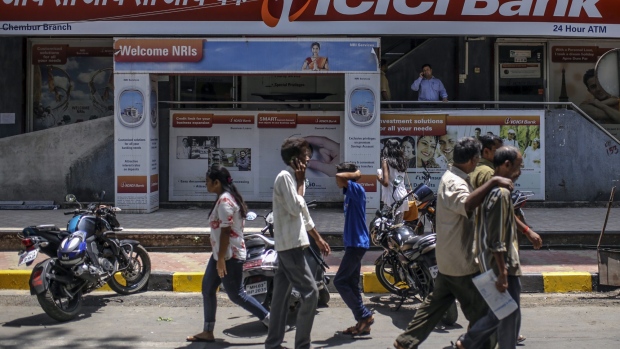 Pedastrians walk past an ICICI Bank Ltd. branch in Mumbai, India, on Saturday, April 21, 2018. ICICI Bank is scheduled to announce full year earnings on May 3. , Bloomberg

Net income at India’s second-largest private lender stood at 46.16 billion rupees ($620 million) in the three months to June, compared with 25.99 billion rupees a year ago, according to a statement Saturday. That beat an average estimate of 43.37 billion rupees by 10 analysts in a Bloomberg survey.

ICICI Bank’s asset quality risk is less than its peers given the lender’s large exposure to the secured mortgage and vehicle business as part of its total loan book. The bank has been growing its so-called safer retail loans at double the pace of its corporate book as a recent coronavirus wave caused a cash crunch among businesses following localized lockdowns in April and May.

The Reserve Bank of India has extended a one-time debt restructuring facility until September, allowing lenders to extend repayment lengths on stressed loans without having to classify them as non-performing. The relaxation will mask the true extent of soured loans in the banking system which the RBI forecasts to rise to 9.80% by March 2022 from 7.48% a year ago.

ICICI has also been able to accelerate its credit card portfolio, benefiting from the absence of market leader HDFC Bank, which has been banned by the Reserve Bank of India from issuing new cards.