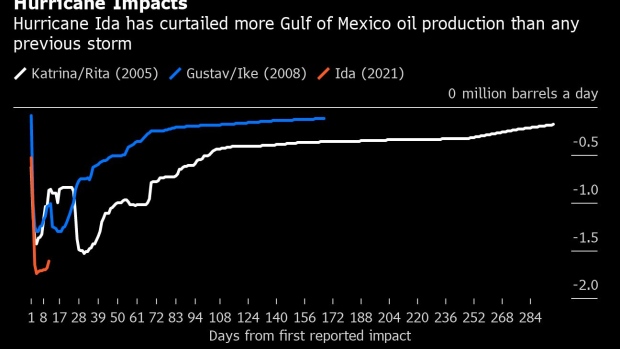 The Royal Dutch Shell plc Norco Refinery during a power outage caused by Hurricane Ida in LaPlace, Louisiana, U.S., on Monday, Aug. 30, 2021. The storm, wielding some of the most powerful winds ever to hit the state, drove a wall of water inland when it thundered ashore Sunday as a Category 4 hurricane and reversed the course of part of the Mississippi River. , Bloomberg

(Bloomberg) -- Hurricane Ida may not have been the deadliest or most damaging weather system ever to smash into the U.S., but its initial impact on Gulf of Mexico oil supply has been greater than any other storm in history.

Ida has been responsible for the loss of 16.8 million barrels of output in the ten days since the first production platforms were evacuated. That’s 32% more crude than was lost to Katrina, and 42% more than to Gustav/Ike in comparable periods.

The prolonged disruption caused by the 2005 storms eventually led to the deferral of more than 160 million barrels of Gulf of Mexico production.

Back then, the disruption caused by Katrina and Rita lasted well into the following year, with some output never restored. How long Ida will continue to curtail Gulf of Mexico production won’t be known until damage assessments are completed.