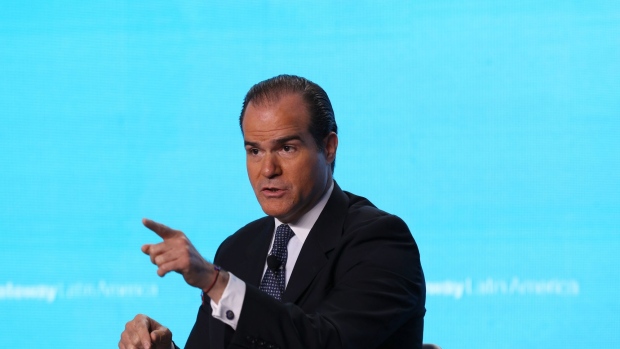 (Bloomberg) -- The board of a top development bank focused on Latin America voted Thursday to recommend removing the lender’s president after a probe into an alleged romantic relationship with a top aide found he probably violated ethics rules.

The 14 executive directors of the Inter-American Development Bank unanimously recommended ousting Mauricio Claver-Carone, according to people familiar with the process, who asked not to be identified describing a closed-door meeting. The IDB press office wouldn’t immediately comment when asked to confirm the vote.

Ultimate responsibility for removing Claver-Carone rests with the IDB’s board of governors, mostly finance ministers from the 48 member countries and governments to which the executive directors report. They will have until Tuesday to vote online, although the process is expected to be a formality, the people said.

Then-President Donald Trump’s 2020 nomination of Claver-Carone, a White House aide, to lead the development bank focused on Latin America opened a rift between the US and the region. He was the first US citizen to lead an institution traditionally presided over by a Latin American since its creation in 1959.

The US supports Claver-Carone’s dismissal, a Treasury spokesperson said. The US is the biggest shareholder in the Washington-based IDB, with about triple the weight of second-largest Brazil and Argentina. The lender is key to US influence in Latin America.

The bank loaned $23.5 billion last year, focusing on boosting economies and offering credit lines to buy Covid-19 vaccines for a region that was one of hardest hit globally by the pandemic. Nations experienced one of the worst economic contractions in their history in 2020, with millions losing jobs or fallen into poverty.

Claver-Carone -- a 47-year-old former top Treasury Department adviser, International Monetary Fund representative and foreign-policy satellite radio host from Miami -- has mounted an aggressive defense to keep his job. In a statement posted Tuesday on the IDB’s website, Claver-Carone said he fully cooperated with the investigation and asserted that it “does not substantiate the false and anonymous allegations that were made against me or IDB staff in the press.”

But the Treasury spokesperson said Claver-Carone’s refusal to fully cooperate with the investigation, and his creation of a climate of fear of retaliation among staff and borrowing countries, has forfeited the confidence of the bank’s staff and shareholders and necessitates a change in leadership.

“It’s shameful the U.S. commented to the press before notifying me and that it is not defending two Americans against what is clearly fabricated information,” Claver-Carone said in a statement. “It’s beyond satire that China found its way into the IDB during the Obama Administration and now Biden officials are handing it back over on a silver platter, days after the initial anonymous malicious campaign was proven to be unsubstantiated.”

The investigation found evidence -- backed by handwriting analysis, divorce records and interviewee statements -- supporting the conclusion that the pair were in a romantic relationship prior to joining the Washington-based IDB in late 2020 “and that the relationship may have continued during their employment at the bank,” according to the Sept. 19 report prepared by law firm Davis Polk & Wardwell LLP at the direction of the IDB’s board.

Claver-Carone, in interviews with Davis Polk in recent weeks, denied ever having a romantic relationship with the aide, who declined to be interviewed for the investigation, according to the report. The person didn’t respond to requests for comment.

In comments to Bloomberg, Claver-Carone said he was interviewed by investigators for more than seven hours and responded to many of their requests for information.

The probe also found that Claver-Carone took employment action to benefit the aide, raising her salary twice in less than a year for a cumulative 46% increase to more than $400,000.

The report hasn’t been made public but has been seen by Bloomberg.

The probe found “no direct evidence of an existing relationship” between Claver-Carone and the aide, the report said. “However, particularly in light of their failure to cooperate, it would be reasonable to conclude that the evidence of a prior relationship, and the additional circumstantial evidence of a current relationship while they were both at the bank, constitute a violation of the applicable bank policies.”

(Updates with US Treasury support for dismissal beginning in fifth paragraph)