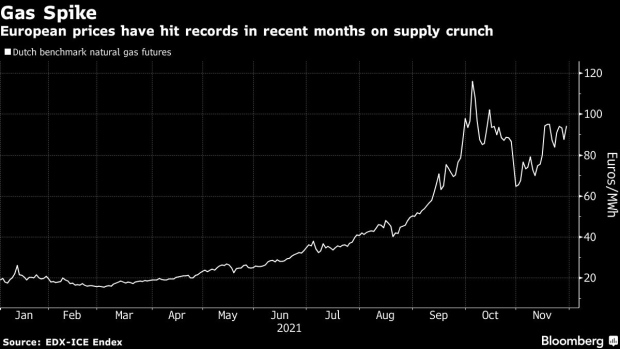 (Bloomberg) -- Energy producers -- not the transition to a greener economy -- are a key reason for soaring natural gas and power prices in Europe, according to International Energy Agency Executive Director Fatih Birol.

The price spike is the result of factors including demand growth, supply outages and extreme-weather events, “but also -- I want to underline this -- some of the deliberate policies of energy producers,” Birol said at the European Hydrogen Week conference in Brussels. He didn’t name specific producers.

Birol’s comments come as colder weather threatens to exacerbate a natural gas supply crunch that has pushed prices to record levels in recent months. Europe’s storage sites are seasonally low, and primary supplier Russia has signaled that it has little appetite to boost gas flows to the continent. At the same time, competition for liquefied natural gas is tight due to demand from Asia.

Earlier this month, Belarus threatened to shut a key pipeline carrying Russian gas to the European Union amid a dispute over migration. In September, a group of EU lawmakers urged the European Commission to investigate the role of Gazprom PJSC in the increase in gas prices.

Meanwhile, Nord Stream 2, a gas pipeline project linking Russia to Germany, remains mired in the approval process amid the prospect of U.S. sanctions. Qatar, a major gas exporter, says it’s producing what it can.

Read More: Europe’s Energy Crisis Is About to Get Worse as Winter Arrives

The energy crunch comes as the EU attempts to shift its economy away from a reliance on fossil fuels in a bid to become the first climate-neutral continent by the middle of the century. A legislative package that would slash emissions still has to be approved by member states. Some countries have warned the pace of transition could leave the continent more exposed to price spikes.

Birol said it’s “wrong” to say that high prices are the result of the clean-energy transition.

The IEA leader added that the policies of some producing countries don’t make sense, given that gas has been touted as a fuel to help smooth any potential price hiccups during the transition. He warned that if the problem isn’t addressed and evaluated in the right way, it could become a barrier for further climate policies.

“The recent price spikes in natural gas did not get good marks from millions of consumers around the world, including Europe,” Birol said. “I am not sure the current gas prices are in the benefit of the gas producers.”