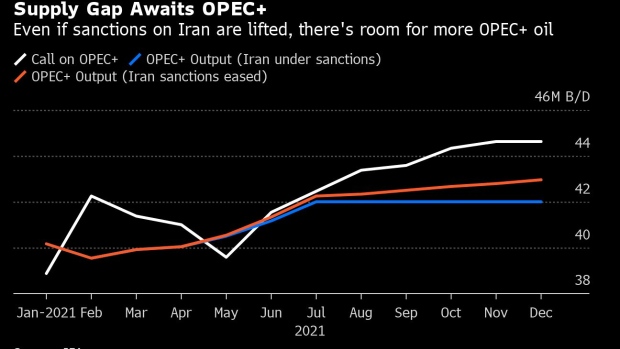 (Bloomberg) -- Global oil demand may rebound to levels seen before the pandemic in a year, the International Energy Agency said, signaling a speedier recovery than its previous estimates.

“Demand in one year or so may well come back to the levels of before the crisis,” IEA Executive Director Fatih Birol said in a Bloomberg Television interview. There’s a “strong” recovery in progress in the U.S., China and Europe.

It’s a slight shift from the most recent outlook from the organization, which advises major economies. In a medium-term report published in March, the Paris-based agency said that consumption wouldn’t recover to pre-crisis levels until 2023.

The IEA estimated in a report last month that demand has revived to about 94% of prior levels, remaining depleted by the lack of air travel. It warned then that the outlook for consumption remained “fragile.”

Nonetheless, the agency is now cautioning on the risk that markets may over-tighten.

As lockdowns ease and travel resumes, the IEA sees a supply shortfall in global oil markets in the second half of this year. Birol warned that prices, which topped $70 a barrel in London on Tuesday, will climb further unless OPEC and its partners restore some more of the production they halted during the pandemic.

The alliance led by Saudi Arabia and Russia is meeting on Tuesday, and may hold preliminary discussions on reviving the remainder of its spare capacity. It’s currently in the process of reactivating 2 million barrels a day, but this will still leave the producers with several million more offline.

“One thing is clear: in the absence of changing the policies, with the strong growth coming from the U.S., China, Europe, we will see a widening gap” between demand and supply, Birol said. This “in turn would put further upward pressure on the prices.”