Global oil demand will drop this quarter for the first time in over a decade as the coronavirus batters China’s economy, the International Energy Agency said.

The new estimates show that oil markets face a significant surplus despite the latest production cuts by OPEC and its partners. Crude already sank to a one-year low below US$50 a barrel last week and the impact of the epidemic will be felt throughout the year, the agency said.

“Demand has been hit hard by the novel coronavirus and the widespread shutdown of China’s economy,” the Paris-based IEA said. “The crisis is ongoing and at this stage it is hard to be precise about the impact.”

World fuel consumption -- which had previously been expected to grow by 800,000 barrels a day during the three-month period, compared with a year earlier -- will instead contract by 435,000 a day, the IEA said in its monthly oil market report.

For 2020 as a whole, the virus will curb annual growth in global consumption by about 30 per cent to 825,000 barrels a day, the lowest since 2011. The effects will be more significant than those of the 2003 SARS epidemic because of China’s increased importance and integration within the world economy.

The outbreak has shuttered businesses and prompted the quarantine of tens of millions of people in China, the world’s biggest crude importer. The country accounted for about 75 per cent of last year’s oil-demand growth, according to the IEA, which advises most major economies.

U.S. crude futures have fallen 17 per cent this year as traders assessed the impact of the epidemic. Consumers are unlikely to benefit from the drop in fuel prices because the disease will inflict damage on the wider economy, the IEA said. 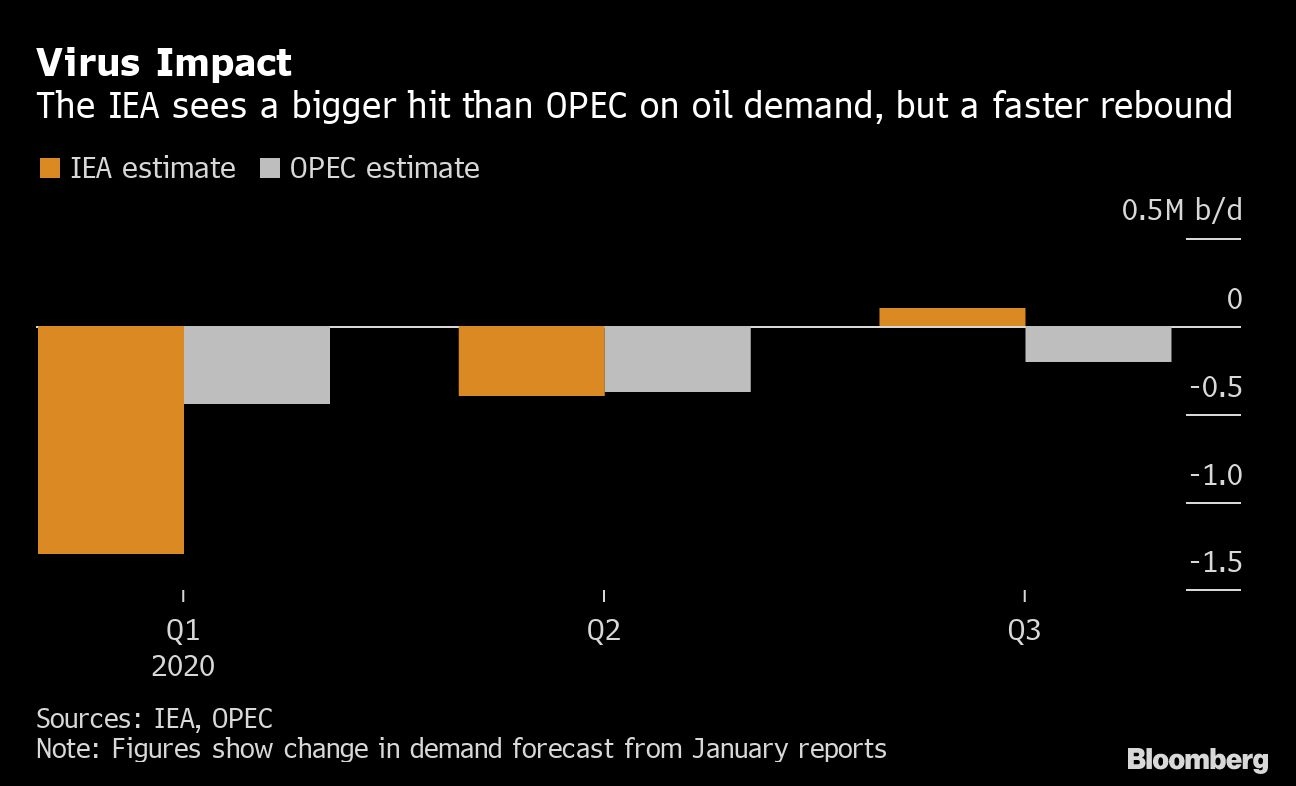 The outbreak has prompted Saudi Arabia, the world’s largest oil exporter, to push its allies in the Organization of Petroleum Exporting Countries and beyond to consider an emergency meeting and further production cuts. However, Russia, the kingdom’s most important partner in managing supplies, has so far resisted the initiative.

Even though the group launched new supply curbs at the start of this year, the slump in demand threatens markets with a surplus of about 1.7 million barrels a day during the first quarter and 560,000 in the second. Last month, OPEC was already pumping the least crude since the financial crisis of 2009, according to the IEA.

The OPEC+ alliance had already faced an oversupply in the first half of 2020 because of the ongoing output surge from U.S. shale-oil drillers, the agency said. That industry is likely to remain resilient against the price slump until later in the year, it predicted.

Given the abundance of supply, disruptions in OPEC members such as Libya and Nigeria are having little impact on prices, the agency said.