The world is failing to invest in energy on the scale needed to escape catastrophic climate change and avoid sharp increases in fossil fuel prices, the International Energy Agency warned.

In a report just weeks before a key climate change summit known as COP26, the agency said that investment in green energy like solar and wind is falling short of what’s needed to keep the planet from warming up significantly. At the same time, spending on fossil fuels is lower than needed if current demand growth for oil, natural gas and coal continues.

“There is a looming risk of more turbulence for global energy markets,” Fatih Birol, the head of the agency, said in a statement Wednesday. “We are not investing enough to meet for future energy needs.”

The stark warning comes as the global economy weathers the most crippling energy crunch in at least a decade, with rolling power blackouts hitting China and India. Even in Europe fertilizer producers and steel-makers have been forced to shut down due to record electricity and gas prices. And yet, global emissions are on track to post their second-largest annual increase in 2021, nearing an all-time high. 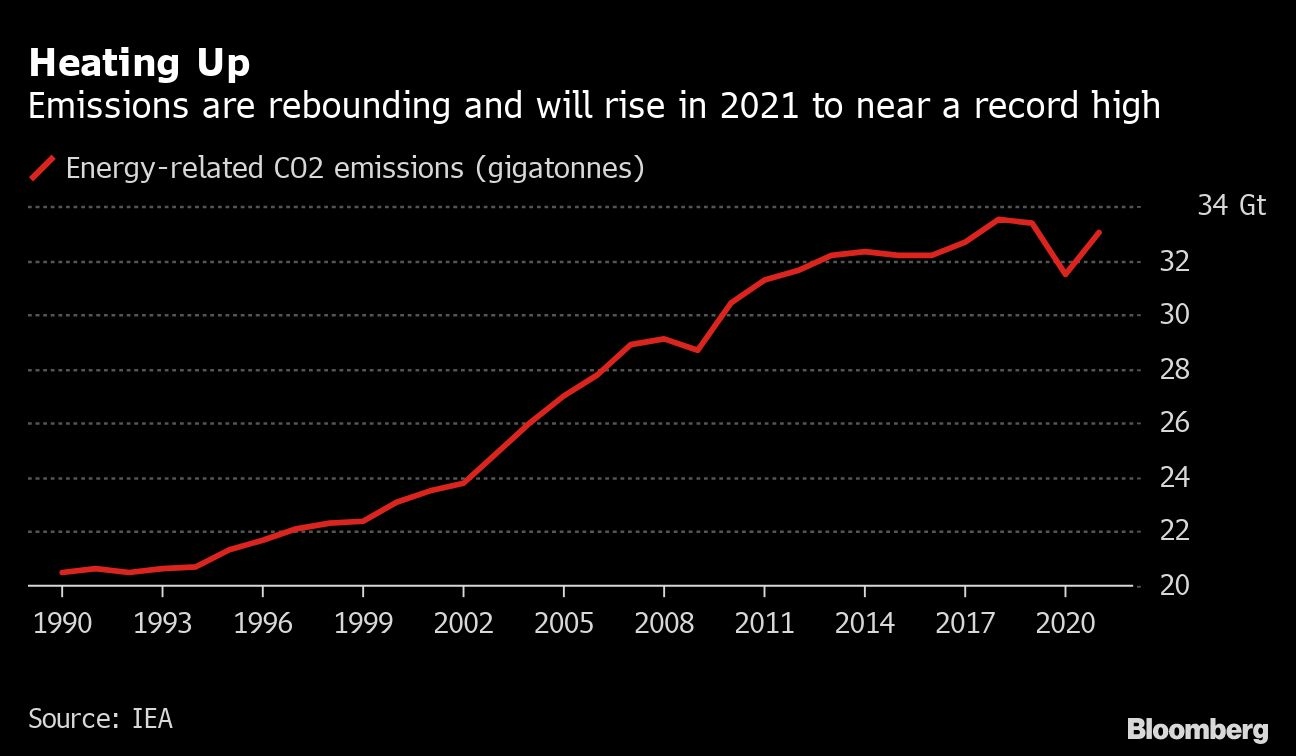 In the past, the agency -- which advises some of the most industrialized countries including the U.S., Germany and Japan -- has focused its warnings on the lack of spending in green energy. But in its flagship World Energy Outlook report it also underlined that current investment isn’t enough if the planet continues to rely as heavily on fossil fuels at it does now.

“In recent years, investment in oil and gas supply has often appeared to be geared toward a world of stagnant or even falling demand, while purchases of internal combustion engine vehicles and expansion of natural gas infrastructure point the other way: toward ever-increasing oil and gas consumption.”

The pandemic, which led to a near-record low in new oil and gas investment in 2020, has intensified the trend, the IEA said. “If demand remains at higher levels, this would result in tight supply in the years ahead, raising the risks of higher and more volatile prices.”

Over the last month, the cost of coal has surged to a record well above US$200 a ton, surpassing the 2008 peak during the last commodity boom, and natural gas has hit all-time highs in Europe and Asia. U.K. short-term electricity prices surged at one point to more than 400 pounds (US$544) per megawatt hour, about 10 times normal levels. And crude has surged to a seven-year high above US$80 a barrel as demand for gasoline, diesel and other refined petroleum products surges.

In a media conference announcing the report, Birol advocated boosting investment in green energy by at least three times the current level to meet climate change targets. He warned investors that betting on fossil fuels was a bad idea, instead predicting “handsome” returns to those who bet on green energy.

But he conceded that under the current energy demand and supply trajectory there was a looming problem. “We see a mismatch between the demand coming strongly for energy” but on the oil and gas side “not enough investments to meet the demand growth.” The solution, he said, was to invest in green energy rather than pour more money into oil and gas.

The IEA appears to be trying to walk a fine line. In the past, it has been criticized by green campaigners for missing the explosive growth in solar and wind power and the huge drop in green energy costs. Since then, the Paris-based body changed tack, focusing more on clean energy, and at times advocating for lower spending on fossil fuels. That has worried some of the IEA’s member countries, which fear fossil fuel supply may fall faster than demand, triggering price spikes that could undermine political support for climate policies.

Birol said that encouraging signs in clean energy were running up “against the stubborn incumbency of fossil fuels,” adding: “Governments need to resolve this at COP26 by giving a clear and unmistakable signal that they are committed to rapidly scaling up the clean and resilient technologies of the future.”

The COP26 meeting in Glasgow, Scotland, that starts at the end of October, has been called the last opportunity the world has to avert catastrophic climate change.

The IEA presented policy makers with three scenarios -- rather than forecasts -- of how the world’s energy map may evolve over the next 30 years. Only one, called net-zero emissions by 2050, will keep global warming to 1.5 Celsius. That scenario calls for a dramatic drop in fossil-fuel demand, and requires a halt to developing new oil and gas fields, though the IEA conceded that investment will be needed to sustain production in some current fields. The two other scenarios, which track climate and energy policies currently implemented and also pledges, envisage a heavier reliance on fossil fuels, and would see global temperatures rising by 2.1 and 2.6 Celsius, respectively.

Whatever path the world follows, the IEA is worried that governments aren’t fulfilling their pledges to build back greener after the pandemic. Oil, gas and coal demand is rising strongly in 2021, and China has hinted at a shift in its energy and climate policy, with an emphasis on avoiding the shortages that currently are crippling its economy.

“If you don’t change direction, you will end where you were going,” Tim Gould, IEA chief energy economist, said in an interview before the report’s publication. “Unless you change the structure of energy demand, a recovery in economic activity was always likely to lead to the re-emergence of previous patterns of both energy demand and emissions.”