Canadians who are struggling to buy a home could find they get better bang for their buck by purchasing physical property through real estate investment trusts, some analysts say.

REITs have long been favoured by yield-hungry investors because they provide steady dividend income and tax benefits. Some experts are convinced now is an opportune time to invest in REITs amid rising inflation, record capital flowing into the property sector and tight real estate supply. Though like all investments, these investments do not come without risks.

“Historically, real estate stocks have performed well in inflationary times like the ones we’re in,” said Andrew Moffs, portfolio manager at Vision Capital Corp, in an interview.

Statistics Canada recently said the country’s inflation rate climbed 7.5 per cent in February from a year earlier, a 31-year-high, and a large reason why the Bank of Canada raised interest rates earlier this month. Meanwhile, home prices soared more than 20 per cent in February to a record $816,720, according to the Canadian Real Estate Association, leaving many Canadians priced out of the market.

“When interest rates rise because of inflation during an economic expansion, so does most rental income for REIT companies, which leads to the profits being redistributed to shareholders through dividends,” Moffs explained.

He also noted there is a record amount of private capital chasing real estate, making this space more attractive to potential investors. Roughly US$364 billion in private capital was raised to invest in global real estate in the past year, according to Preqin, an industry data tracker.

Investors who placed money in Canadian residential REITs over the past decade have received a 220 per cent return, which includes dividend payouts, according to Alreits. In comparison, homeowners have seen an approximate 137 per cent increase in home prices from 10 years ago, according to the Canadian Real Estate Association. It should be noted that the above data does not take tax measures into consideration.

“You can’t live in a REIT, but you can get a better return on your money through one compared to a home,” he said in an interview.

Investors can appreciate their wealth through REITs without taking on the costs of a mortgage, property taxes, and home maintenance, he added.

Over the past five years, Canadian industrial REITs have led the way when it comes to investor returns, averaging a roughly 227 per cent increase. 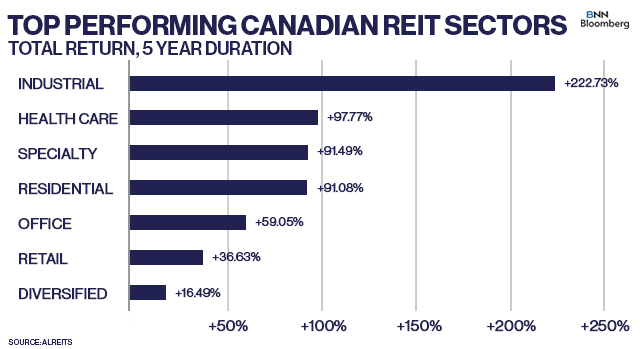 Jimenez is bullish on the industrial REIT space, especially on a global scale. He anticipates the need to build stronger domestic supply chains and the continued boom in e-commerce to lead some businesses to need more space for their operations.

These trends, accelerated by the pandemic, also helped to drive record growth in the self-storage REIT sector.

Many people who found themselves working from home felt they needed to clear out more space for remote offices and living conditions under lockdowns, explained Steven Scott, chief executive officer of StorageVault Canada, in an interview.

He believes this demand will continue as thousands of immigrants settle in Canada, a group which historically made the most use of self-storage units.

But like all investments, REITs can have a downside.

If they take on significant debt to acquire their properties, their balance sheet could face pressure in a rising interest rate environment, although it depends on how long their leases are and if any costs can be passed onto customers, according to Brad Thomas, a veteran REIT analyst and chief executive officer of equities research firm Wide Moat Research.

To put the debt situation into perspective, Canadian REITs have an average debt-to-total assets ratio of 42 per cent, while U.S. REITs are closer to 49 per cent, according to Alreits.

For Thomas, these numbers are no reason to panic as many REITs deleveraged and locked in record low-interest rates in the years following the 2008 financial crisis.

“Executive teams don’t just wake up and get hit with an interest rate hike. They’ve been preparing for this for years,” he added.

Another industry watcher also flagged regulation as a risk.

The federal Liberals campaigned last year on a plan to limit the profits corporate landlords make off of Canada’s housing market; they also said they would review the tax treatment of REITs. Those initiatives were put back in the spotlight following Prime Minister Justin Trudeau’s deal with the New Democrats that will keep his minority government in power until 2025. Their agreement includes a pledge to “tackle the financialization of the housing market.”

“Institutional investors are buying family homes at least 15 per cent above their asking price so they can rent them out, and people are getting priced out because of it,” said Robert Simone, the REIT sector head at Hedgeye Risk Management.

He added this danger is not being talked about nearly as much as it should be.

“There’s only so long that municipal governments can hold off demanding a crackdown on the REIT structure if it continues to get in the way of first-time homebuyers,” Simone warned.