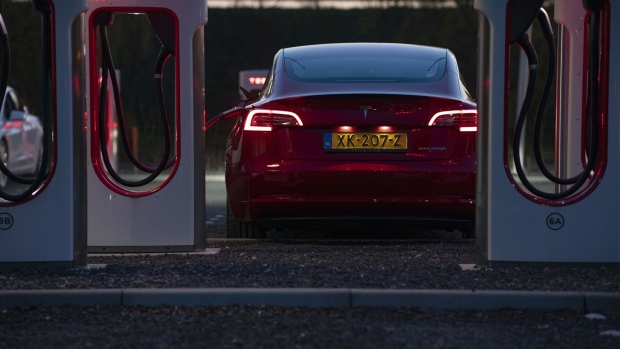 (Bloomberg) -- Tesla Inc.’s removal this week from an industry benchmark index is raising new questions about what ESG actually means to investors.

The strategy, widely seen as favoring industries ostensibly interested in sustainability (of the environmental, social and governance sort) started about two decades ago as a way to protect investors from risks tied to things like global warming, labor violations and discrimination. Since then, it’s morphed into a $35 trillion industry of its own and—as the market exploded—sown confusion about what metrics should be used to gauge it, and fury over the tsunami of what’s come to be called greenwashing.

Enter Tesla. While many would agree few automakers have done more than Elon Musk’s company in the global shift away from fossil fuels, the company’s management and workplace issues have been at times problematic. So much so that S&P Dow Jones Indices, while acknowledging Tesla’s environmental prowess, nevertheless decided to remove the electric vehicle maker from the S&P 500 ESG Index over safety and labor issues.

“How can a company whose self-declared mission is to ‘accelerate the world’s transition to sustainable energy’ not make the cut in an ESG index?” wrote Margaret Dorn, senior director and head of ESG indexes for S&P Dow Jones in North America, in a blog post. Answering her own question, she said “there are many reasons,” including that Tesla “has fallen behind its peers when examined through a wider ESG lens.”

Dorn focused on social and governance factors at the company, which had a negative impact on its overall ESG score. She singled out two events centered around allegations of racial discrimination and poor working conditions at Tesla’s factory in Fremont, California, as well as its handling of a U.S. National Highway Traffic Safety Administration investigation after multiple deaths and injuries were linked to its “autopilot” function.

Academics like Todd Cort of Yale University agree with Dorn. The S&P methodology focuses on corporate performance, and Tesla’s “management systems and controls are still pretty undeveloped” relative to industry leaders, he said.

But investors including Cathie Wood of ARK Investment Management have strenuously disagreed. In a post on Twitter, she called S&P’s decision “ridiculous.” It’s “not worthy of any other response.”

Paul Watchman, an industry consultant who wrote a seminal report in the mid-2000s that helped spur ESG investing, said Tesla should be part of ESG indexes. “Not all breaches of ESG are equal, and this assessment shows just how warped the S&P assessment is,” he said.

Tesla does have multiple problems related to corporate governance and health and safety, but Watchman said they should be viewed in context. “However relevant these failures and shortcomings may be, they aren’t nearly as bad other companies.” Fossil fuel giants being one example, he said.

MSCI Inc., the leading provider of ESG ratings, still includes Tesla (as well as Exxon Mobil Corp.) in its more widely tracked ESG-focused indexes, adding to the confusion about what ESG actually is. (The methodologies MSCI and S&P use for their ESG indexes are very similar.)

MSCI said its ESG-focused indexes are designed to “maximize their exposure to positive ESG factors” while “exhibiting risk and return characteristics” similar to the overall market. Companies with links to the tobacco, “controversial” weapons, civilian firearms, oil sands and thermal coal are excluded from the indexes.

“The market continues to conflate ESG with sustainability, and you’re certainly seeing that play out here.”

From a market standpoint, ESG indexes matter because investors have poured $410 billion into passively run ESG-labeled funds, according to data compiled by Bloomberg Intelligence. “The market continues to conflate ESG with sustainability, and you’re certainly seeing that play out here,” said Rob Du Boff, senior ESG analyst at BI. “Our ETF team likes to note Tesla is the ultimate Rorschach test for ESG investors.”

Tesla has made the world a greener place with their innovative electric vehicles, and investors have been rewarded as a result, Du Boff said. But they’ve also been stung by Musk’s tussles with the US Securities and Exchange Commission and his recent takeover approach to Twitter Inc., he said.

“Turns out investors should have been paying closer attention to signs of poor corporate governance,” Du Boff said.

And that brings the conversation back to trying to define ESG. Hours after it emerged that S&P Dow Jones had expelled Tesla, Shaheen Contractor and Eric Balchunas from BI published a note with this headline: “Is Tesla ESG? Many Funds Think So Even as S&P ESG Index Drops It.”

Contractor and Balchunas said their analysis ranks Tesla 46th in the S&P 500 for inclusion in ESG-focused funds. “The automaker’s ESG status remains among the most debated for any stock,” they wrote.