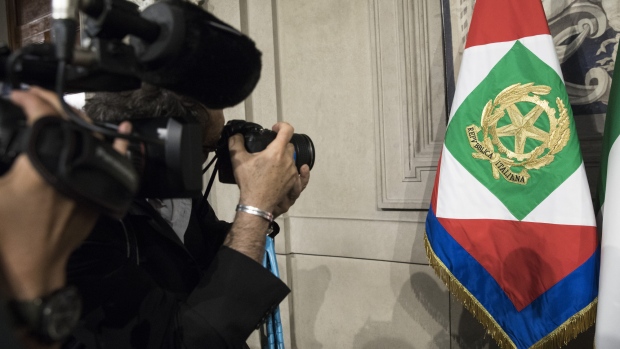 Members of the media take photographs of the Italian national flag standing inside the Quirinale Palace in Rome, Italy, on Tuesday, May 29, 2018. Italy may be headed toward snap elections as early as July after the latest attempt to form a government saw premier-designate Carlo Cottarelli leave a meeting with the president without an agreement on a cabinet team. , Bloomberg

(Bloomberg) -- Italy is used to political turmoil, but the latest government crisis -- triggered by League leader Matteo Salvini’s ambition to become prime minister -- is one of the most complex in recent history.

Predicting the outcome is difficult. What’s certain is that, despite the summer vacation, markets will be focused on events in Rome next week. The crisis will impact assets in the euro area’s No. 3 economy and beyond and could help determine whether insurgent populist movements around the world gain traction or lose steam.

Here’s a brief guide to all the drama:

Prime Minister Giuseppe Conte will address the Senate at 3 p.m. in Rome, possibly leading to a confidence vote, though it may not take place the same day.

Conte is expected to respond to Salvini’s charge that the uncomfortable coalition of the anti-migrant League and the insurgent Five Star Movement -- in power since June 2018 -- is now a broken marriage, unable to agree on key measures such as tax cuts.

Conte surely realizes that a governing majority no longer exists. That much was clear when Salvini tried to schedule a no-confidence vote for this week, dragging senators back to Rome from their summer vacations. Another unlikely alliance -- of the Democratic Party and Five Star -- blocked that maneuver.

Conte could forego the confidence vote and head directly to the Quirinale presidential palace to hand in his resignation. However, most commentators say that he wants to go through the motions of a ballot in the interests of transparency.

The man who has to manage the crisis is Italy’s 78-year-old president, Sergio Mattarella. He decides whether to seek an alternative coalition or call a national election.

According to Italian media reports, Mattarella doesn’t want to jeopardize passage of the 2020 budget. The latest financing plan will be closely monitored by investors concerned Italy may breach European Union deficit rules, likely triggering further market turmoil and another clash with Brussels.

Conte is scheduled to address the lower house of parliament at 11:30 a.m. However, if he resigns Tuesday, or if the Senate holds a confidence vote, then the session in the chamber of deputies will be canceled.

As if the government crisis wasn’t enough, the lower house is scheduled to debate and hold a final vote on a constitutional reform that would drastically reduce the number of lawmakers.

It’s originally a Five Star proposal, but Salvini said Aug. 13 that he would back the measure in exchange for support for snap elections. But if Conte has resigned by then, or lost the senate confidence vote, then the vote can’t be held.

To contact the reporter on this story: Dan Liefgreen in Milan at dliefgreen@bloomberg.net

To contact the editors responsible for this story: Ben Sills at bsills@bloomberg.net, Iain Rogers