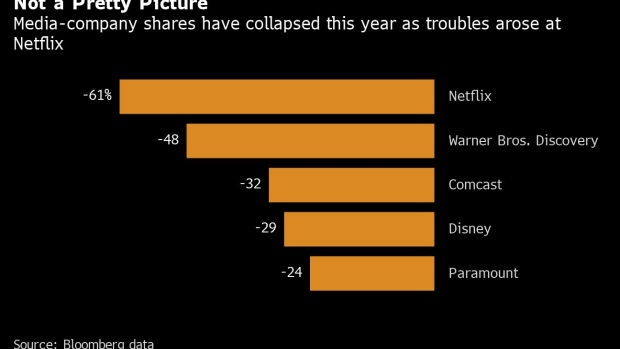 (Bloomberg) -- If you work in film and TV, the bad news is arriving almost daily.

A multiyear boom in film and TV production, driven by media companies racing to sign up subscribers for their new streaming services, has come to a painful halt, giving way to firings, introspection and handwringing. While much of the country only worries about a recession, major media companies are cutting jobs or consolidating. Their stock prices have collapsed.

“The very foundation that the streaming business sits on has been devolving on sand,” Walt Disney Co. Chief Executive Officer Bob Chapek said in a recent interview. “It’s all been shifting.”

Netflix, which shocked the industry and Wall Street earlier this year with its first subscriber losses in a decade, has let go hundreds employees and vacated office space. Warner Bros., which completed its merger with Discovery in April, has been in cost-cutting mode, with CEO David Zaslav working to deliver a promised $3 billion in savings from the deal.

Early on, Chapek said, he targeted profitability in 2024 for his Disney+ streaming service because he knew investors would tire of ongoing losses. The company reduced its forecast for content spending this year by about 10%. Chapek said the current number is “steady state.”

Still, even experienced producers are finding it hard to get projects going at studios, unless they’re based on familiar material.

“Nobody wants to do anything other than sequels,” said Bill Mechanic, a former head of Fox Filmed Entertainment. “It’s harder. The environment has gotten worse.”

That’s creating even more than the usual amount of anxiety in Hollywood.

“There is a general sense of uncertainty of when things will pick back up,” said Sheenie Ambardar, a Los Angeles psychiatrist with many entertainment industry clients. “There’s a general sense of where is this going and how are we going to get out of this?”

Under Zaslav, Warner Bros. will no longer approve movies for its HBO Max streaming service budgeted at more than $30 million to $40 million, agents and producers are being told. That’s half what it was before. The company has stopped ordering reality shows or live-action shows for kids on HBO Max. The Discovery+ service could be folded into HBO Max and supply some of those programs.

Executives at other studios are canceling projects even with stars attached or putting them on the back burner. They’re also regularly asking for 20% reductions in budgets for series, according to talent agents Bloomberg News spoke with. The tighter spending is impacting other ongoing work in Hollywood, like a push to boost diversity on screen. Recent cancellations include “Woke,” a Hulu series about a Black cartoonist, and “Chad,” a TBS show focused on a Persian-American family.

Read more: ABC Relocates ‘Dancing With the Stars’ to Disney+

Agents said they’re now less willing to deliver completed scripts to studios, preferring instead to offer story outlines that executives can ponder and develop a sense of ownership in. Proposals for shows now get sent up to the highest levels for approval, where they can sometimes languish. “The script is on Jen’s desk,” has become a common refrain from Amazon.com Inc. development executives, one agent said, referring to studio chief Jennifer Salke.

“The fear in town is it’s an all-or-nothing game,” said Chris Fenton, an executive producer, most recently of lower-budget pictures such as this year’s “Block Party.” “Either you’re involved in the super-premium category or you’re nervous.”

Only a few years ago, Netflix was signing high-priced deals with some of the most successful TV creators, including Shonda Rhimes and Ryan Murphy, as well as notables such as the Obamas and Prince Harry and Meghan Markle. Outside of a few hits, most notably “Bridgerton” and “Inventing Anna” from Rhimes, it hasn’t had much to show for it and would be unlikely go on a binge like that again.

The result is fewer employment opportunities, a trend that could worsen if the US falls into a recession. The executive recruiting firm Korn Ferry is seeing a flood of resumes, according to William Simon, who handles entertainment industry placements, and the number of spots to fill is diminishing.

“Everybody’s pumping the brakes,” he said.

Project Casting Inc., an online job site for actors and other crew members, said openings for TV and video positions have tumbled 48%, dropping every month since June. “After Netflix announced their subscriber loss, it was a like a shockwave throughout Hollywood,” CEO Jonathan Browne said in an interview.

After posting three consecutive record quarters, filming in Los Angeles County fell 5.8% in the second quarter, as measured by days of shooting. The culprit was TV production, which was down nearly 16%, according to FilmLA, which provides the permits to work in the county.

Some mainstays of the business, such as the pilot, that first episode that was used to test a new show, have all but disappeared as streaming services now go straight to a full series order on concepts they like. The length of a series, typically 22 episodes on broadcast TV, is being cut to just a handful online.

Actor and TV show creator Owen Dennis got his bad news while driving home from work in mid-August. Warner Bros had just pulled his animated show, “Infinity Train,” from the Cartoon Network and HBO Max. A writer with a cult following, Dennis spent the next few days trying to figure out why. In a long post on Substack, he spoke for many in the business about the budget cuts sweeping Hollywood.

“Across the industry, talent is mad, agents are mad, lawyers and managers are mad,” he wrote. “Even execs at these companies are mad.”