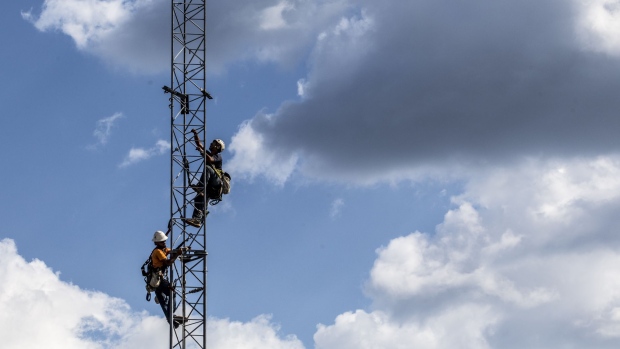 Verizon Communications Inc. workers install a temporary cell tower after Hurricane Florence hit in Newport, North Carolina, U.S., on Wednesday, Sept. 19, 2018. President Donald Trump lauded the federal response to Hurricane Florence on Wednesday as he began a tour of areas in North and South Carolina hit over the weekend by high winds and torrential rain. , Bloomberg

(Bloomberg) -- IHS Holding Ltd. priced shares at the bottom of the expected range ahead of its New York listing on Thursday, valuing the global telecom-tower operator at almost $7 billion.

The owner of more than 30,000 phone masts across Africa, the Middle East and South America will sell stock at $21 each, compared with a range of $21 to $24, according to a statement. The deal will raise $378 million for the company to fund growth plans.

“Proceeds will be used to build within our current markets, and move into new markets,” Chief Executive Officer Sam Darwish said by phone. “We have high growth markets that require new sites.”

IHS is based in Mauritius, making the initial public offering the largest in the U.S. by an African business. The company has been expanding to take advantage of improved connectivity in emerging markets, while wireless operators have been selling off their masts to specialist firms to raise cash.

“We look at markets in Asia and Latin America and if a new opportunity to acquire a portfolio of towers present itself, or go with a large greenfields project, we will definitely do that,” Darwish said.

MTN Group Ltd., Africa’s largest mobile-phone company, was the biggest shareholder in IHS with a 29% stake before the IPO. The Johannesburg-based firm is among investors selling a combined 4.5 million shares, valued at $94.5 million. French investment firm Wendel SE, which owns 26%, is holding on to its entire shareholding.

MTN will have just over 85 million shares after the listing, the company said. They are valued at almost $1.8 billion based on the opening price.