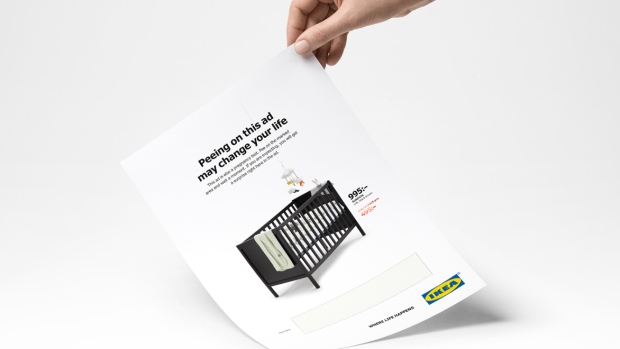 IKEA is offering free pregnancy tests in a bid to lure clients, with women who test positive offered a discount on a new crib.

The test is embedded in an advert published in Swedish women’s magazine Amelia. Developed in association with Swedish ad agency Akestam Holst and Mercene Labs, the ad uses the same kind of technology used in standard pregnancy-test kits available in pharmacies.

The initiative by the maker of Billy bookshelves and Lack tables might not have raised eyebrows if it weren’t for the crude instructions provided: the top of the magazine’s page says “Peeing on this ad may change your life.” Women whose urine sample tests positive are encouraged to apply for an Ikea Family membership card, which offers special deals on select items.

It is not the first time that Ikea marketing campaigns have courted controversy. The world’s biggest furniture retailer in 2016 ran a series of ads called "Where life happens," in which it touched on topics such as divorce and single-parent households. In 2012, it was forced to apologize for removing some women from its catalog in Saudi Arabia and a year later received criticism from the Thai Transgender Alliance for a commercial they claimed was disrespectful toward transsexuals.

Earlier this week, another famous Swedish retailer, Hennes & Mauritz AB, found itself at the center of controversy after it published an ad showing a black child modeling a hoodie with the text “coolest monkey in the jungle."