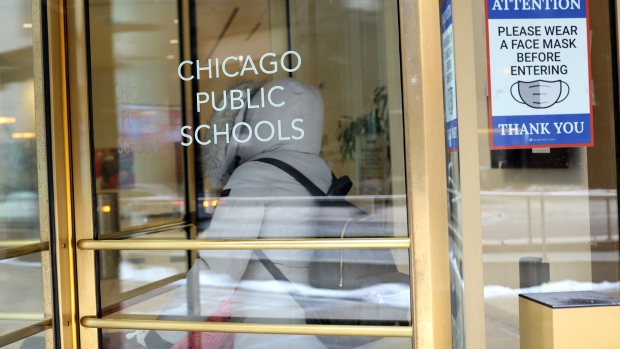 CHICAGO, ILLINOIS - JANUARY 05: A sign is displayed at the entrance of the headquarters for Chicago Public Schools on January 05, 2022 in Chicago, Illinois. Classes at all of Chicago public schools have been canceled today by the school district after the teacher's union voted to return to virtual learning citing unsafe conditions in the schools as the Omicron variant of the COVID-19 virus continues to spread. (Photo by Scott Olson/Getty Images) , Photographer: Scott Olson/Getty Images North America

(Bloomberg) -- Illinois Governor J.B. Pritzker has asked the Biden administration for Covid-19 tests to help resolve the latest dispute between Chicago Public Schools and its teachers union, a disagreement that’s led to the cancellation of classes for two straight days.

“I spoke in the last couple of days with the White House to ask them for help for Chicago Public Schools,” Pritzker said in an interview Thursday. “There is a challenge all over the nation in need of testing but I think there is an urgent need in Chicago because we want to get those kids back in school.”

The Chicago Teachers Union on Tuesday voted to shift back to remote learning starting the following day amid demands that the city’s schools boost measures to mitigate a Covid-19 surge driven by the omicron variant. Its requests include an expansion of testing amid a citywide positivity rate that has climbed to 23%. The union is asking Chicago Public Schools to expand testing because of low vaccination rates and the number of students who are signed up for weekly surveillance testing.

Chicago Mayor Lori Lightfoot has objected to suggestions for an opt-out proposal, saying it erodes parents’ choice and could open the school system to liabilities. The two sides continue to negotiate after classes were canceled Wednesday and Thursday.

Plans for Friday classes have yet to be announced. The teachers union on Thursday said its members were “door-knocking in their school communities to sign families up for testing.”

A rising demand nationally for tests has led to supply constraints, and there aren’t enough on hand at the state level to satisfy demand in Chicago and the rest of Illinois. Pritzker said he called the White House about 36 hours ago with his request for the city’s school system.

Pritzker didn’t describe what kinds of tests he requested or how many, and added “to be honest, we’ve asked for anything and everything they could provide that would help us fulfill the need for testing in all Chicago Public Schools.” He said he connected the district to officials from the White House because the schools know what they need.

“Parents are suffering, children are suffering when they can’t get back in school and I understand teachers need to be safe in school as kids are,” he said. “The parties need to come together and find common middle ground and I have not yet seen that but I am hopeful.”