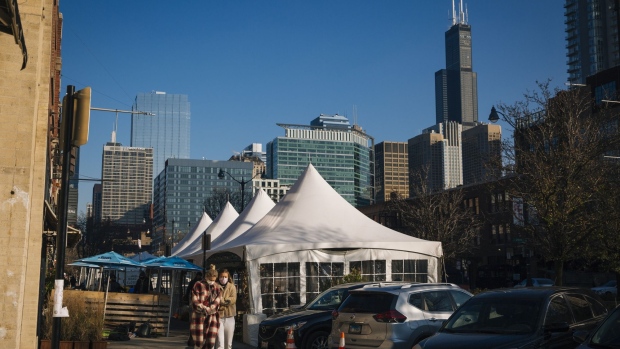 (Bloomberg) -- Illinois, the U.S. state with the worst credit rating, wants to use some of its $7.5 billion of federal aid from the American Rescue Plan to chip away at unpaid bills and short-term debt racked up during the pandemic, according to Deputy Governor Dan Hynes.

The state’s unpaid bills stand at about $5.74 billion, and Illinois still has to pay back about $3 billion of the $3.2 billion it borrowed last year from the Federal Reserve’s Municipal Liquidity Facility. Governor J.B. Pritzker’s administration has “basic principles” for paying down some loans and bills but is awaiting specific federal rules and restrictions attached to the aid, Hynes said during a state senate appropriations committee hearing on Tuesday.

Illinois expects a “reasonable amount of flexibility” for the one-time money that will likely run out in a couple of years, Hynes said. The governor’s administration plans to work with state lawmakers on spending the federal aid to combat the spread of the virus, rebuild Illinois’s economy and improve the financial foundation of the state, he said.

“But we just want to be mindful of the fact that these will be one-time dollars,” Hynes said. “If we build up spending in an artificial way, it’s going to make our problems worse and our challenges more difficult in out years.”

Like Illinois, governments across the country are trying to draw up spending plans for their portion of the $350 billion for state and local governments earmarked in President Joe Biden’s $1.9 trillion relief plan. In neighboring Wisconsin, Governor Tony Evers, who vetoed a bill to give the legislature approval over the use of federal funds, said he plans to use most of the $3.2 billion his state stands to receive to spur an economic recovery. He plans to funnel aid to tourism, infrastructure, broadband access and the statewide pandemic response.

Vermont Governor Phil Scott said he wants to use $1 billion of federal aid for economic development, climate-change mitigation, broadband, water and sewer infrastructure, and housing, according to an April 6 statement.

While the coronavirus outbreak created similar challenges for local governments across the country, Illinois stands out as the only state that tapped the Fed for a loan after interest rates it faced in the bond market surged last year, partly because of fiscal problems that predated Covid-19. Yields on the state’s debt reached more than 6% for 10-year securities in March 2020, but have since tumbled to around 2% as the outlook for the state has improved.

Illinois still pays more than any other state to borrow in the $3.9 trillion municipal bond market because of its longstanding fiscal challenges. The state’s unfunded pension liabilities have grown to $141 billion, and Pritzker is seeking to cut spending and end some corporate tax breaks to balance the state budget for the coming fiscal year. Investors and analysts say they are closely watching how the state will use the forthcoming federal aid.

“There’s a healthy dose of skepticism that they make the right choices,” said John Ceffalio, senior municipal research analyst for CreditSights Inc. “The state historically has made a lot of bad decisions. The healthy skepticism is given historical precedent.”

The plans outlined by Hynes such as paying down debt and the bill backlog are “exactly the kind of thing that the bond market is looking for,” and the state has the opportunity to improve its credit standing, Ceffalio said.

S&P Global Ratings, Moody’s Investors Service and Fitch Ratings all rank Illinois at the lowest level of investment grade. In March, S&P and Moody’s lifted their outlooks on the state to stable from negative, partly because of the federal aid.

The aid “clearly seems to be a windfall” and washes away near-term credit concerns, said Ty Schoback, senior municipal research analyst at Columbia Threadneedle Investments, which owns Illinois debt as part of $18 billion in muni assets. Investors are watching to see if Illinois can show restraint, he said. The state’s revenue collections have exceeded expectations and that should also help, he said. Schoback described the early comments from Pritzker’s administration about spending the federal aid as “encouraging.”

“The only question that’s relevant is whether they use that in a prudent fashion,” Schoback said.