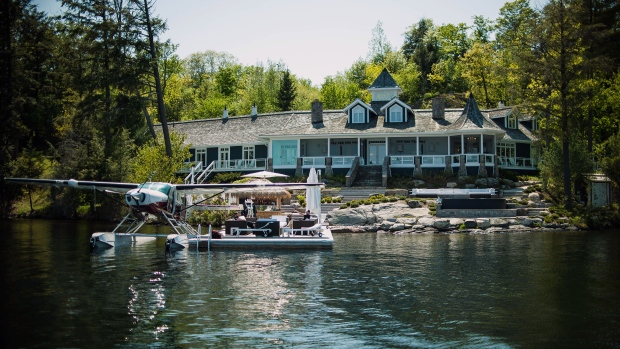 A float plane sits docked outside of a cottage on Lake Jo in Muskoka, Ontario, Canada, on Saturday, May 23, 2015. , James MacDonald/Bloomberg

Taxes on rich Americans are probably going up if Democrats win both the presidency and Congress anytime soon. Whether it’s to provide revenue for more government spending on health care or the environment, or simply to reduce inequality, it seems likely that the well-off will pay more. The idea receives wide support:

Exactly which type of taxes would go up, and on which group of rich people, and by how much, remains to be seen. Prominent proposals include Democratic Senator Elizabeth Warren’s plan for a 2 per cent tax on wealth of more than US$50 million and Representative Alexandria Ocasio-Cortez’s idea for a 70 per cent tax rate on income of more than US$10 million a year.

If and when taxes are raised, an interesting question is how those affected will respond. They can probably be expected to spend more on political campaigns to limit taxes. They will almost certainly engage in more intensive avoidance efforts.

But if that doesn’t work, the affluent could resort to the ultimate dodge — they could leave the country. This is one of the things that forced France to drop its “supertax” of 75 per cent on incomes of more than 1 million euros (US$1.13 million). That tax, which lasted from 2012 through 2014, caused rich people such as executive Bernard Arnault and actor Gerard Depardieu to move to neighboring Belgium, and made it hard for France to attract senior managers.

The U.S. is hardly France. Other than a few eccentric personalities such as Facebook Inc. co-founder Eduardo Saverin, who renounced his American citizenship in 2015 and moved to Singapore to escape taxes, very few millionaires tend to abandon the richest, most powerful country in the world. The U.S. is home to some of the most important centers of the technology industry, the finance industry and others. And unlike in Europe, there isn’t an abundance of alternative nearby countries to move to, meaning that wealthy American expatriates might have to move far from family and friends.

But if the U.S. raised top tax rates a lot, the situation might change. And there is one other appealing country nearby, which (mostly) speaks the same language as the U.S. Although some Americans think of Canada as a quasi-socialist economy thanks to its single-payer health-care system, it’s not actually a high-tax country. The top federal income tax rate in Canada is 33 per cent — lower than the equivalent rate in the U.S. The provincial tax rate in Ontario, home to the business hub of Toronto, is 13.16 per cent, similar to the 13.3 per cent paid by Californians.

If the U.S. raised taxes a lot on the rich, would Canada follow suit? It’s true that during the past century or so, the top tax rates charged by major developed economies have tended to move roughly in concert:

But that doesn’t mean Canada would necessarily follow the U.S.’s lead on top taxation. And even if it did raise taxes on the rich when the U.S. did, it wouldn’t necessarily raise them by as much.

There is precedent for small countries deliberately and successfully using preferential tax rates to attract prosperous foreigners. In a 2013 paper, economists Henrik Jacobsen Kleven, Camille Landais, Emmanuel Saez and Esben Schultz analyzed the effects of a 1991 Danish law that allowed high-earning immigrants to get three years of preferential tax rates. They found a surprisingly large effect — lots of wealthy people moved to Denmark. A number of other European countries, such as Portugal and the U.K., have employed similar schemes.

Canada is, in some ways, in a similar position to nations like Denmark. It’s small compared to the U.S., which has about nine times its population. Because of this, Canada has had trouble retaining its top talent, as its best and brightest tend to move to the U.S. where the big industry clusters are. An increasingly restrictive U.S. immigration system might help reduce the brain drain, but another coup would be if Canada could lure rich Americans to spend their dollars north of the border.

The already-rich, however, would be a less important prize than the Americans hoping to make it big in the future. If aspiring entrepreneurs and top managers moved to Canada to escape sky-high U.S. taxes, they would start and run businesses there. That could allow Toronto, Vancouver, Montreal and other Canadian cities to steal a march on Silicon Valley and New York City and become the new tech clusters of the continent.

To the Americans who support much higher taxes, this might be a perfectly acceptable tradeoff. Rich people fleeing to Canada would reduce U.S. inequality, and curb the political influence of the donor class — two goals that figure prominently in the political left’s agenda. Cities such as San Francisco and New York would lose some of their dynamism, but at least that might ease the excessive costs of housing there.

In the calculus of fans of higher taxes on the rich, the benefits could easily outweigh the costs. But if lost tax revenue and the weakening of key industrial clusters angered too many Americans, then the U.S., like France, could be forced to moderate its ambitions to chip away at the fortunes of the rich.