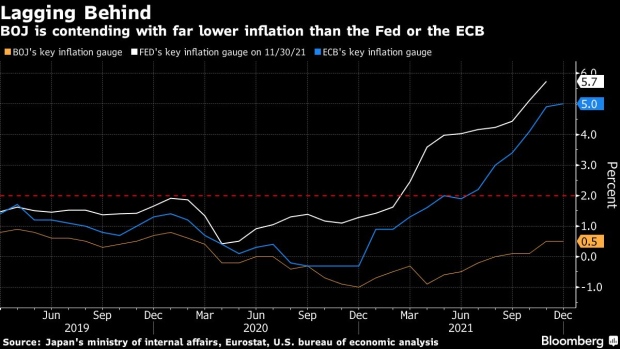 A pedestrian wearing a protective face mask walks past the Bank of Japan (BOJ) headquarters at dusk in Tokyo, Japan, on Monday, Sept. 14, 2020. The Bank of Japan left its bond-purchase amount unchanged at a regular operation on Monday. , Bloomberg

(Bloomberg) -- The Bank of Japan should keep its inflation-targeting stimulus rolling and consider shortening the maturity of its yield target to make its easing framework more sustainable, the International Monetary Fund said Friday, in comments that contrast with global moves to tighten policy.

Given that Japan’s underlying inflation momentum remains weak at around 0.5% and is not currently projected to reach the BOJ’s 2% target, the central bank needs to keep its policy stance accommodative, said Ranil Salgado, Japan mission chief for IMF.

In its latest Article IV report published earlier Friday, the IMF also said that if inflation remains weak, the BOJ’s first option should be to cut its policy rate.

The fund’s recommendations that the BOJ keep pressing ahead with stimulus to spur inflation highlights Japan’s different circumstances as global central banks including the Federal Reserve and the Bank of England pivot toward tightening policy to stem accelerating price growth.

Inflation remains much weaker in Japan than its global peers as seen in Tokyo price data released earlier Friday. Core consumer prices in the capital edged up just 0.2% in January, an indication that national inflation will also slow for now.

Still, inflation is expected to jump in spring when sharply lower phone charges stop dragging on the consumer price index, fueling talk that the central bank might look to adjust policy later in the year.

The uneven nature of price moves in Japan also means that sharp price increases in energy and daily necessities are squeezing household budgets and companies’ profitability, making inflation a potentially uncomfortable issue for Prime Minister Fumio Kishida ahead of elections in the summer.

The fund mentioned the possible shortening of the maturity of the BOJ’s yield target as a move that could make the bank’s yield curve control more sustainable, rather than as a move on the path toward policy normalization. The fund has also recommended the targeting of a shorter maturity in previous reports.

The bank currently sets a target of around 0% for the yield on 10-year Japanese government bonds.

In other recommendations, the IMF also said the central bank could increase a portion of bank reserves subject to the negative interest rate to strengthen its effect as a policy tool.