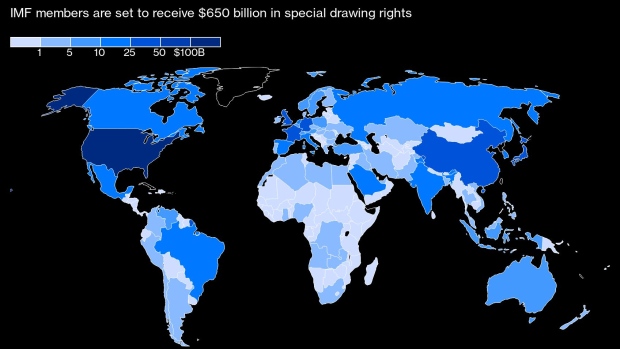 (Bloomberg) -- The International Monetary Fund board gave its unanimous support to a proposal to create a record $650 billion of new reserves for its members on Friday, bringing the plan to increase resources for nations struggling with the pandemic one step closer to final approval.

All members attending the meeting of the executive board -- composed of 24 individuals from IMF member countries and Managing Director Kristalina Georgieva -- gave their backing to the plan, according to two people familiar with the discussions, who asked not to be identified because they’re private.

The plan still requires final approval by the board of governors -- composed of representatives, normally the finance minister or central bank head, of the 190 IMF member countries. Georgieva previously said that she expects that in August.

Officially, the next step is for Georgieva to prepare a report for the board of governors, which requires the executive board approval. Spokesman Gerry Rice said the fund expects that could happen around mid-July. But after Friday’s discussion, that basically amounts to an administrative step, according to one of the people familiar with the process.

The IMF press office confirmed that the proposal on the creation of the reserves, known as special drawing rights, or SDRs, was discussed on Friday, but declined to comment on the executive board’s reaction.

The IMF is preparing to give its member countries the biggest resource injection in its history to boost global liquidity and help emerging and low-income nations deal with mounting debt and the fallout from the Covid-19 pandemic.