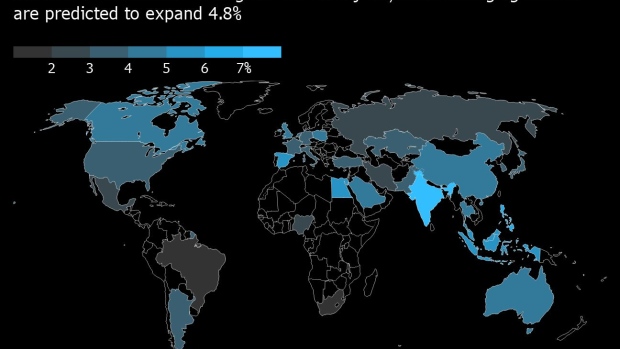 The International Monetary Fund cut its world economic growth forecast for 2022 as the Covid-19 pandemic enters its third year, citing weaker prospects for the U.S. and China along with persistent inflation.

The global economy will expand 4.4% this year, down from an estimate of 4.9% in October, the Washington-based IMF said in its World Economic Outlook on Tuesday. The fund forecast 3.8% growth for 2023, up from the prior projection, but cumulative expansion for the two years will still be 0.3 percentage point less than previously forecast.

The U.S., the world’s largest economy, saw its forecast cut on the outlook for President Joe Biden’s spending agenda and China, the second-biggest, on challenges in real estate.

The world economy expanded 5.9% last year, the IMF estimated, the most in four decades of detailed data. That followed a 3.1% contraction in 2020 that was the worst peacetime decline in broader figures since the Great Depression.

Central banks that slashed interest rates to soften the economic decline caused by the pandemic face pressure to tighten policy to confront surging consumer prices, threatening to curtail the growth rebound. Governments also have less fiscal space for spending to address health needs and buoy their economies after piling up record debt.

“The last two years reaffirm that this crisis and the ongoing recovery is like no other,” Gita Gopinath, who became the fund’s No. 2 official this month after three years as its chief economist, wrote in a blog accompanying the report.

“Policy makers must vigilantly monitor a broad swath of incoming economic data, prepare for contingencies, and be ready to communicate and execute policy changes at short notice,” Gopinath said. “In parallel, bold, and effective international cooperation should ensure that this is the year the world escapes the grip of the pandemic.”

While the IMF sees the omicron variant weighing on growth in the first quarter, it expects the negative impact to fade starting in the second quarter, assuming that the global surge in infections abates and the virus doesn’t mutate into new variants that require more restrictions on mobility.

Supply-chain disruptions are spurring more broad-based inflation than anticipated, the IMF said, with the annual rate projected to average 3.9% in advanced economies this year, up from a prior 2.3% estimate, and 5.9% in emerging and developing nations.

The projections assume that bad health outcomes from Covid-19 recede to low levels in most countries by the end of this year, vaccination rates improve and treatments become more available. Risks are tilted to the downside, with new variants threatening to extend the pandemic.

Bringing the pandemic to an end depends on ending vaccine inequality, the IMF said. The fully vaccinated share of the population is about 70% for high-income countries but less than 4% for low-income nations. Eighty-six nations, accounting for 27% of the world’s population, fell short of the 40% vaccination level for the end of last year that the IMF estimates is needed to curb the pandemic.

The world also suffers from deep inequality in Covid-19 testing, with testing rates about 80 times higher in high-income nations than low-income countries.