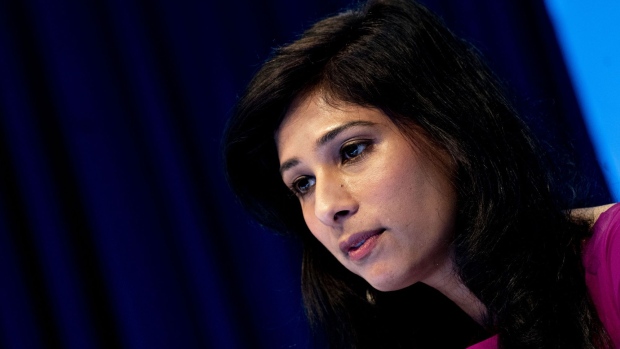 Gita Gopinath, chief economist at the International Monetary Fund (IMF), speaks at a World Economic Outlook news conference during the annual meetings of the IMF and World Bank Group in Washington, D.C., U.S., on Tuesday, Oct. 15, 2019. The IMF made a fifth-straight cut to its 2019 global growth forecast, citing a broad deceleration across the world's largest economies as trade tensions undermine the expansion. , Bloomberg

(Bloomberg) -- The International Monetary Fund hopes to see a breakthrough in negotiations for a new program with Argentina “in the next days,” according to First Deputy Managing Director Gita Gopinath.

“We are adopting a flexible and pragmatic approach,” Gopinath told reporters in Washington during a virtual briefing on the IMF’s new economic forecasts. “We hope we will make even more progress in the next days.”

Gopinath didn’t provide more precise timing. She added that a new program must be “credible,” and “address the imbalances that the country has.”

Negotiations have stalled between the IMF and Argentina on a deal that would reschedule payments on over $40 billion of outstanding debt. President Alberto Fernandez continues to criticize the Fund for insisting on a faster pace of spending cuts than what his government is proposing.

Talks are entering a critical stage as a $2.9 billion repayment on the loan given to the prior Argentine government comes due in March. Fernandez has said the government can’t pay with foreign reserves at razor thin levels.

While Argentina seeks debt relief, the IMF’s largest shareholder, the U.S., wants to see a credible economic plan. Secretary of State Antony Blinken met with Argentine Foreign Minister Santiago Cafiero last week in Washington, where he “encouraged Argentina to put forward a strong economic policy framework that will return the country to growth,” according to a statement.