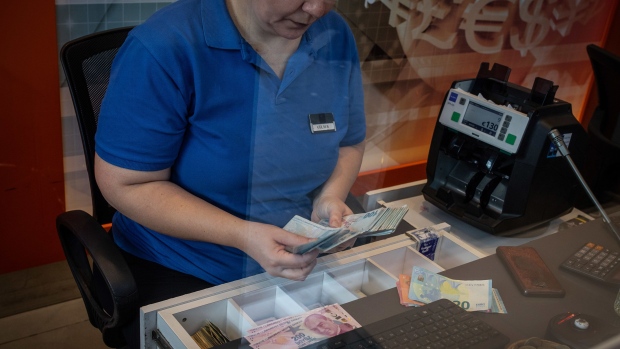 (Bloomberg) -- Turkey’s foreign currency coffers will get a boost of $6.4 billion Monday thanks to the International Monetary Fund’s recent special drawing rights program.

They’re part of a $650 billion injection the IMF is making globally to foster resilience and stability in a global economy battered by the Covid-19 pandemic. The appeal of the SDRs to some nations is that they come condition-free, unlike many of the fund’s loan programs.

Turkey’s total gross reserves rose about 15% to $107.1 billion this month while the lira has depreciated around 15% against the dollar since the appointment of central bank Governor Sahap Kavcioglu on March 20. When money borrowed from local lenders via swaps is stripped out from the Turkish central bank’s net reserves, they fall below zero, according to Bloomberg calculations.

Still, total gross reserves under Kavcioglu have risen as Turkey has sought to increase the use of currency swaps. Earlier this month, Turkey’s central bank signed a 17.5 billion lira ($2 billion) swap agreement with South Korea after signing a similar deal in June with China worth $3.6 billion. The amount the central bank has been borrowing from local lenders through swaps has also increased to $60.2 billion this month from as low as around $53 billion earlier this year, when market-friendly Governor Naci Agbal was in charge of monetary policy.

Kavcioglu is aiming to further boost gross reserves by increasing the share of re-discount credits, according to central bank officials with direct knowledge of the matter. Re-discount credits, which allow the monetary authority to beef up its reserves while supporting exporters, have contributed $9.1 billion to its coffers in the first seven months of the year and are projected to bring in at least $11 billion more by the end of the year.

Opposition parties criticize President Recep Tayyip Erdogan’s government for the aggressive sale of the central bank’s foreign currency reserves in 2019 and 2020 in a futile effort to prop up the lira without resorting to rate increases.