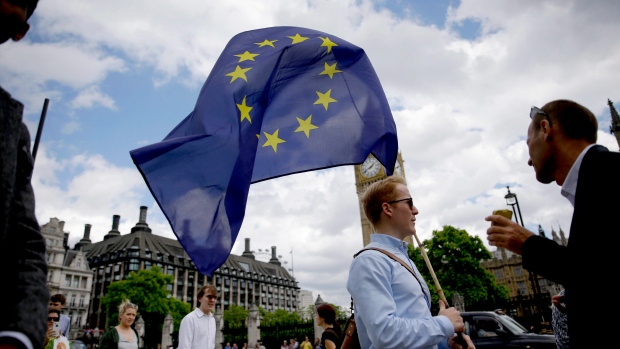 A remain supporter stops to talk to people as he walks around with his European flag across the street from the Houses of Parliament in London , The Canadian Press

WASHINGTON - The International Monetary Fund (IMF) cut its global growth forecasts for the next two years on Tuesday, citing uncertainty over Britain's looming exit from the European Union.

The move included a nearly full percentage-point reduction in the U.K.'s 2017 growth forecast.

Cutting its World Economic Outlook forecasts for the fifth time in 15 months, the IMF said that it now expects global GDP to grow at 3.1 per cent in 2016 and at 3.4 per cent in 2017 -- down 0.1 percentage point for each year from estimates issued in April.

“The outcome of the U.K. vote, which surprised global financial markets, implies the materialization of an important downside risk for the world economy,” the IMF said Tuesday in its World Economic Outlook Update.

The outlook for Canada’s economy is little changed either this year or next, with a 0.1 per cent downward revision this year and a 0.2 per cent upward revision for 2017.

The Fund said that despite recent improvements in Japan and Europe and a partial recovery in commodity prices, the U.K.'s  Brexit vote had created a "sizeable increase in uncertainty" that would take its toll on investment and market and consumer confidence.

On the day before Britain's June 23 EU referendum, the IMF was "prepared to upgrade our 2016-17 global growth projections slightly," IMF chief economist Maury Obstfeld said in a statement. "But Brexit has thrown a spanner in the works."

The IMF said that the impact will hit hardest in Britain itself, where the institution cut its 2016 growth forecast to 1.7 per cent, down 0.2 percentage points from its April forecast. It cut the 2017 U.K. forecast more sharply, by 0.9 percentage points, to 1.3 per cent.

It said last week that Brexit would have a "negligible" impact on the United States.

The IMF noted that its latest forecasts were made under relatively benign assumptions of a settlement between the EU and Britain that leads to limited political fallout, avoids a major increase in economic barriers and prompts no major further financial market disruptions.

But the Fund also modeled other scenarios, including a "severe" one in which the divorce negotiations go badly, financial stress intensifies, the U.K.-EU trading relationship reverts to World Trade Organization rules, and London loses a large portion of its financial services sector to continental Europe.

Under that scenario, Britain would fall into recession and global growth would slow to 2.8 per cent in both 2016 and 2017, the IMF said.

A middle scenario labeled "downside" would see tighter financial conditions and lower consumer confidence than the baseline, with the U.K. losing some of its financial services sector to Europe. It shows global growth at 2.9 per cent in 2016 and 3.1 per cent in 2017.

Obstfeld said that the financial market recovery following the initial Brexit shock helped persuade the IMF to go with the most benign of the three scenarios.

Responding to the IMF's report, a U.K. Treasury spokeswoman said that the Brexit vote marks a "new phase" for Britain's economy, but the country would remain globally focused.

"Our absolute priority is to send a clear signal to businesses both here and across the world, that we are open for business and determined to keep Britain an attractive destination for investors from overseas," the spokeswoman said in a statement.

The IMF said China's outlook was largely unchanged, with a slight improvement to 6.6 per cent seen in 2016, but still slowing to 6.2 per cent in 2017.

Recessions in Brazil and Russia will be less severe than previously forecast this year due partly to some recovery in oil and commodities prices, the IMF said, adding that both countries will return to positive growth in 2017.

The Fund urged policymakers not to accept the tepid growth rates as a "new normal," and said that they should support demand in the near-term and structural reforms to aid medium-term growth.

The IMF said it had been prepared to raise Japan's 2017 growth outlook by 0.4 percentage points after the delay of a consumption tax hike next spring, but this has been cut in half by the continued rise in the yen's value.