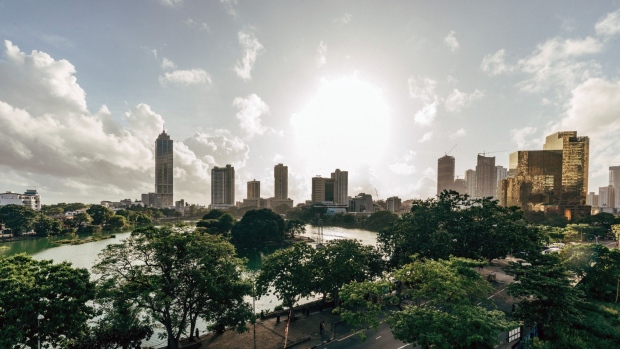 Buildings and the Beira Lake in Colombo, Sri Lanka, on Sunday, May 22, 2022. Sri Lanka’s dollar bonds due July rebound after Friday’s drop, up almost 5 cents on the dollar in the biggest gain since October, as the government holds bailout talks with the IMF. , Bloomberg

(Bloomberg) -- The International Monetary Fund said it made “good progress” in analyzing Sri Lanka’s economic situation and identifying policy priorities, while cautioning that a loan would require adequate assurances that debt sustainability will be restored.

Discussions with Sri Lanka over the past two weeks focused on restoring fiscal sustainability while protecting the vulnerable and poor; ensuring credibility of the monetary policy and exchange-rate regimes; preserving financial-sector stability; and structural reforms to enhance growth and strengthen governance, the IMF said in a statement on Thursday.

“Sri Lanka is facing difficult economic conditions and severe balance-of payments-problems,” the fund said. “We are deeply concerned about the impact of the ongoing crisis on the people, particularly the poor and vulnerable groups.”

The team from the Washington-based fund, which has been in technical-level talks with Sri Lankan authorities seeking a bailout program, welcomed the appointment of financial and legal advisers to work with the nation’s creditors, the IMF said.

A deal with the multilateral lender would also pave the way for assistance from neighboring nations, including India, Japan and China. Sri Lanka, which fell into default for the first time earlier this month, hired Lazard Ltd. and Clifford Chance LLP as advisers to set in motion the debt restructuring that’s key to unlocking IMF aid.

“IMF staff will continue to monitor the economic and political situation very closely and engage with the authorities to formulate concrete measures under an IMF-supported program, as well as broader stakeholders to support a timely resolution of the crisis,” the fund said. “We reaffirm our commitment to support Sri Lanka at this difficult time, in line with the IMF’s policies.”

Sri Lanka is looking to fast-track talks with the IMF and seeking agreement on a loan by mid-June, Prime Minister Ranil Wickremesinghe told Bloomberg News in an interview on Wednesday. The South Asian nation will need up to $4 billion this year to tide over the nation’s worst economic crisis in its independent history, amid growing public anger over shortages of daily necessities, constant power outages and an inflation rate seen hitting 40% in coming months.

Wickremesinghe, who took on the additional role of finance minister on Wednesday, said he hopes to break even or post a primary surplus of 1% of gross domestic product by 2025, compared with an IMF expectation of a 2% surplus. Authorities are looking to slash expenditure and sell assets to stabilize the nation’s finances.