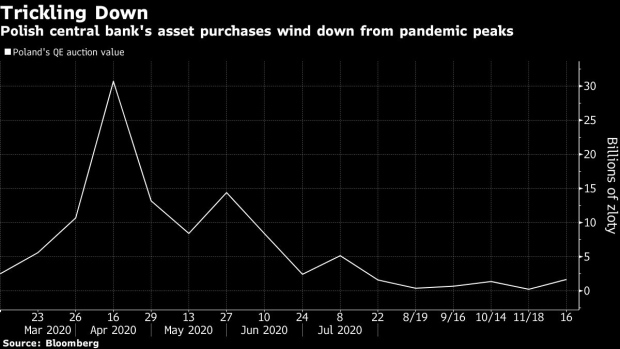 (Bloomberg) -- The Polish central bank should more clearly spell out why it was trying to weaken the zloty, the International Monetary Fund suggested on Monday, adding that quantitative-easing was the best way to support the economy.

The monetary authority surprised markets at the end of December, when it unexpectedly intervened on the foreign exchange market to the tune of $7 billion, pushing the zloty to its worst performance in almost a decade.

While it hasn’t been seen on the market this year, Governor Adam Glapinski said on Friday the central bank may intervene further to enhance the economic benefits of record-low interest rates. Meanwhile, its bond-buying program has in recent months slowed to a trickle.

“Further support for monetary easing would be best achieved through expanded asset purchases,” the IMF said on Monday. “Intervention for monetary-policy purposes could be justified if additional purchases failed to adequately pass through to prices, leaving achievement of monetary accommodation in doubt.”

The zloty was undervalued on average last year on the real effective exchange rate basis, the IMF said, following regular Article-IV consultations with the government and central bank officials.

Policy makers have argued that the currency has been facing an appreciations pressure that if sustained would reduce the pace of economic recovery. Some analysts believe the interventions were mainly designed to boost the central bank’s year-end profit that goes into the government’s budget.

“Beyond smoothing excess volatility, FX intervention may be appropriate for monetary policy purposes if it is part of a well-specified and clearly communicated strategy,” the IMF said.