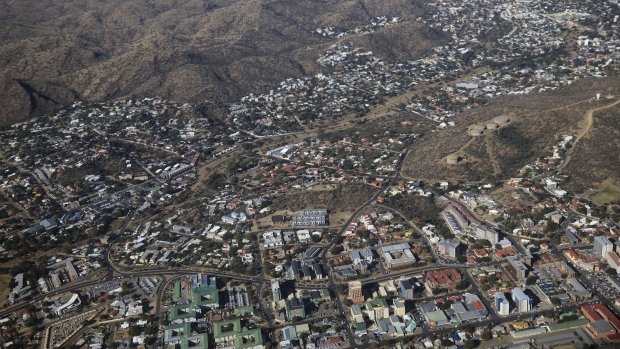 Properties stand on the city skyline seen in this aerial view of the capital city of Windhoek, Namibia, on Wednesday, June 14, 2017. , Bloomberg

(Bloomberg) -- Namibia’s economy will return to growth in 2020 after contracting for three straight years, but a failure to implement structural reforms could keep the southwest African nation stuck in a low-growth trap, according to the International Monetary Fund.

The economy of the world’s largest marine-diamond producer has been hit by a regional drought and a slump in South Africa, its bigger neighbor that it tracks closely and to whose currency the Namibian dollar is pegged. Gross domestic product will contract by 0.2% this year, before expanding at 1.6% in 2020, the Washington-based lender said in an emailed statement following an article 4 consultation in the country.

However, “absent structural reforms, growth is expected to converge to a long-term level of about 3%, which is too low to deliver meaningful improvements in per capita income and reduce unemployment,” the IMF said

These steps include lowering regulatory compliance costs for businesses, reducing electricity and transportation costs by reforming the state-owned companies that operate in these sectors, and containing public-sector salary dynamics by avoiding regulations that hamper domestic competition.

The IMF’s forecast for this year is more upbeat than that of the Bank of Namibia, which has said it sees a 1.7% contraction this year.

To contact the editors responsible for this story: Rene Vollgraaff at rvollgraaff@bloomberg.net, Alastair Reed