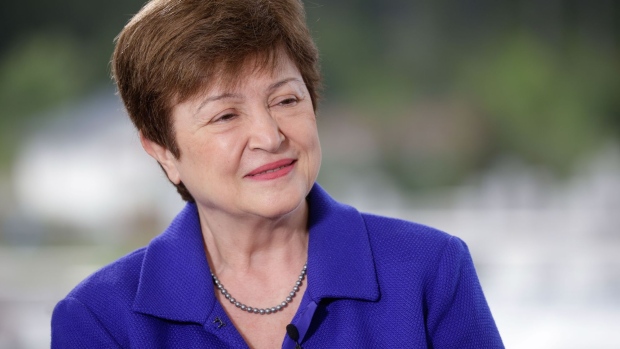 Kristalina Georgieva, managing director of the International Monetary Fund (IMF), during a Bloomberg Television interview on the opening day of the World Economic Forum (WEF) in Davos, Switzerland, on Monday, May 23, 2022. The annual Davos gathering of political leaders, top executives and celebrities runs from May 22 to 26. , Bloomberg

(Bloomberg) -- The International Monetary Fund plans to improve transparency and fairness in its economic analysis after a rare outcry by hundreds of staff members last year over a Bloomberg News report that officials softened a warning about Brazil’s climate-change risks.

While there are strong frameworks and processes in place to protect the integrity of data and analysis, the IMF board and management believe that improvements can be made to strengthen procedures, the Washington-based institution’s board and management said in a statement late Thursday.

The announcement follows an “institutional safeguards review” by executive directors, management and two staff working groups. They looked at the fund’s framework and practices to ensure data integrity, examine the procedures for finalizing staff analysis -- including internal clearance of reports by the board and management -- and the availability and effectiveness of channels to express concerns.

“The system should be bolstered further by clarifying the terms of engagement of offices of executive directors in staff’s conduct of analysis, improving the transparency of internal processes, clarifying the role of management in the clearance process, and identifying principles for evenhanded coverage of emerging economic policy areas,” the fund said.

The review and conclusions came after Bloomberg News reported in October that IMF officials including Managing Director Kristalina Georgieva -- who’s made climate change a signature issue -- softened a warning about environmental risks to Brazil’s economy after President Jair Bolsonaro’s government objected to the language.

The management decision around the end of last July involved the IMF’s key annual evaluation, known as an Article IV consultation, for Latin America’s largest economy. Managers initially gave their seal of approval to the staff report before revoking it hours later and subsequently removing disputed phrasing.

The IMF last October said the decision to change the language was part of the normal process that reports on any of the fund’s 190 member countries go through, with back-and-forth between the staff, their managers and officials from the country being evaluated. And it’s standard practice for senior managers to review and sign off on the country evaluations, a spokesman said at the time.

But for management to revoke approval for a report and remove phrasing that a country objects to is rare, several past and current fund employees who have worked on Article IV evaluations said then. Management made the decision after Georgieva met with Brazil’s representative to the fund board, Afonso Bevilaqua, who had complained several times that the IMF’s evaluation wasn’t supposed to encompass the nation’s climate policy.

Georgieva, in an email to IMF staff in October seen by Bloomberg News, said all fund rules and procedures were respected in the Brazil case.

Still, the case spurred almost 200 IMF staff members to sign a petition asking Georgieva to clarify details of actions that led to the softening of the warning in the Brazil report. Such petitions are rare in the fund’s recent history.

Georgieva also faced discontent following unrelated allegations in an investigation by law firm WilmerHale, conducted for the World Bank, that she pushed staff in 2017 to manipulate China data to boost its ranking in the bank’s “Doing Business” report. Georgieva, 68, denied any wrongdoing, and the IMF board said its investigation didn’t conclusively demonstrate that Georgieva played an improper role in the report in question, which ranks countries’ business climates.

Still, U.S. Treasury Secretary Janet Yellen warned after the Doing Business scandal that it could hurt confidence in the IMF and World Bank unless the institutions take strong actions to prevent misconduct and support whistle-blowers.

The fund “will be working very hard to deliver most of our recommendations by the annual meeting,” which takes place in October, said Ceyla Pazarbasioglu, the director of the IMF’s strategy policy and review department who chaired the staff working group on data and analysis integrity. She spoke with reporters on a call on Thursday.

Separately, the IMF said Thursday that an external panel appointed in February and led by former Bundesbank President Jens Weidmann found that almost one third of respondents in a survey of staff didn’t feel comfortable approaching management above them about disputes without fear of retaliation. Nearly half said the rules governing management’s conduct aren’t as strict or stricter than those that apply to staff.

About 39% of the IMF’s total staff of more than 4,000 participated in the survey. More than one-third of respondents said they had observed either bullying or intimidation in the past five years, while a fifth had experienced it themselves.

The panel also recommended that the fund chief and deputies should issue financial disclosures annually.

“Unethical conduct should be penalized consistently, and the sanctions imposed for such conduct should be communicated to staff,” the external panel that reviewed the Washington-based institution’s dispute-resolution system said in a report released Thursday.