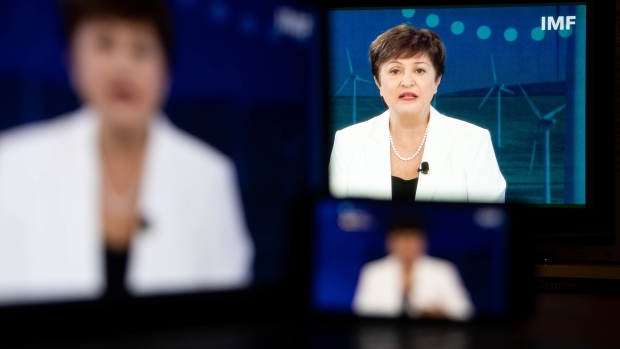 Kristalina Georgieva, managing director of the International Monetary Fund (IMF), speaks during a virtual opening press conference for the annual meetings of the IMF and World Bank Group in New York, U.S., Wednesday, Oct. 13, 2021. The U.S. told IMF board members that it wont seek the removal of Georgieva over allegations that she pushed staff to manipulate data for a World Bank report to help China, likely clearing the way for her to keep her job. , Bloomberg

(Bloomberg) -- The International Monetary Fund will discuss plans for a trust to encourage nations to move their economies toward a more climate-friendly, low-carbon future at its annual meetings this week, the institution’s chief said.

Managing Director Kristalina Georgieva told reporters on Wednesday that the Resilience and Sustainability Trust would be funded by rich nations reallocating some of the reserves that they received through the IMF’s record $650 billion issuance in August. She expects the fund to meet its goal of getting countries to commit to $100 billion of onlending, she said.

The assets, known as special drawing rights, already can be re-channeled to low-income countries through the fund’s Poverty Reduction and Growth Trust, which gives interest-free loans. To broaden the group of nations that can benefit from redirected SDRs, the IMF has been working on a trust for low- and vulnerable middle-income countries.

Georgieva previously said she hopes that trust will be finalized by year-end.

The new facility, known as the RST, would support policy choices “that would underpin the transformation of the economy, and avoid future balance-of-payments crises,” Georgieva said on Wednesday.