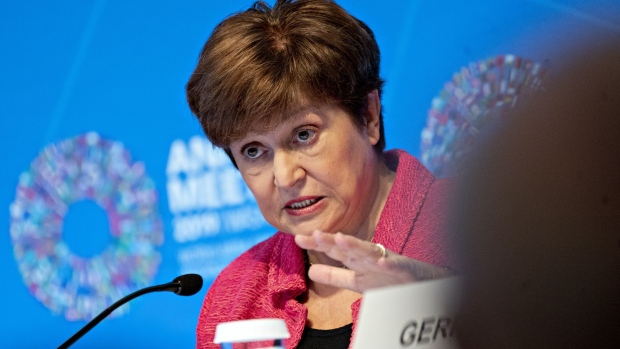 (Bloomberg) -- The head of the International Monetary Fund will press China, the world’s biggest creditor to developing countries, to accelerate finding solutions to a mounting debt crisis in poorer nations when she visits Beijing next week.

“We do not have the luxury of many years to come to a resolution because we are faced with a very significant and widespread debt problem,” Managing Director Kristalina Georgieva said Thursday at an event hosted by Reuters. “We are very keen to see China -- one of the largest, actually the largest bilateral creditor -- take the responsibility of figuring out how we can accelerate that resolution.”

She added she is “very hopeful that when we have a chance next week to discuss these issues we will continue on a path of finding better solutions.”

China has come under criticism for its perceived lack of engagement in a global effort to reduce debt burdens for developing nations, with US Treasury Secretary Janet Yellen saying on multiple occasions that Beijing has become the biggest obstacle to progress.

Developing nations have amassed a quarter-trillion dollar pile of distressed debt that threatens to create a historic cascade of defaults. About 60% of low-income countries are in debt distress, while about a quarter of emerging-market nations’ debt is trading in so-called distressed territory.

The Group of 20 nations has set up a so-called Common Framework that brings the Paris Club of traditional rich debtor countries together with China to try to restructure the debts of low-income countries on a case-by-case basis. Only three nations -- Chad, Ethiopia and Zambia -- signed up, and after almost two years of talks, Chad became the first to find resolution earlier this month.

China is contending with social unrest as public discontent over stringent Covid-19 curbs simmers. Georgieva said there is space for the nation to improve its strategy to tackle the disease.

Georgieva said she hopes China would look more favorably in preventing debt issues from deepening and that it would work to prevent the risk of a spillover and a global debt crisis.

“It also would affect negatively the large creditors and that is to say, with effect, very negatively, China itself,” she said.