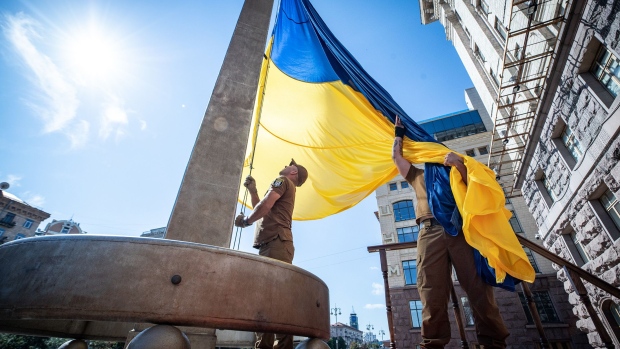 (Bloomberg) -- The International Monetary Fund is tapping for a key role in talks with Ukraine the economist who led negotiations with Argentina to rescue its record loan, as the lender of last resort seeks to help the European country upended by Russia’s invasion.

Julie Kozack is set to oversee and guide the staff team dealing with Ukraine after she becomes a deputy director of the European department next month, according to the fund.

“The IMF continues to support Ukraine’s efforts to overcome the current economic crisis,” the institution’s press office said in an emailed response to questions. “Our staff team led by Ivanna Vladkova Hollar the mission chief -- under the guidance of Julie Kozack -- is working closely with the authorities on their economic plans.”

Vladkova Hollar has served as Ukraine mission chief since early 2020. She, like Kozack, is a two-decade fund veteran who previously worked on countries including Moldova and led the staff team that negotiated a $5 billion loan for Ukraine two years ago.

Ukraine will be an important and complex negotiation after Russia’s invasion sparked the biggest land war in Europe since the IMF’s creation in 1945. The government in Kyiv has repeatedly said it faces a monthly public-finance gap of about $5 billion, much more than its allies have so far been able to pledge.

New pledges of support for Ukraine from international donors declined to about 1.5 billion euros ($1.52 billion) last month, with two-thirds, or 1 billion euros, of the total coming from Norway, according to the latest analysis by the Kiel Institute for the World Economy.

“In July, donor countries initiated almost no new aid, but they did deliver some of the already committed support such as weapon systems,” said Christoph Trebesch, who heads the team that compiles the institute’s Ukraine Support Tracker. “Both financial and military support has fallen further behind what Ukraine needs,” he added. “It also remains small in relation to what some donors are mobilizing in their own countries for crisis response.”

The country has formally applied for a new special IMF loan program, Prime Minister Denys Shmyhal said this month, and expects to receive funds around November or December.

It isn’t clear that Ukraine will be able to get any IMF money at all, based on a central institutional tenet that a country borrowing from the fund have a clear path for repaying the organization so that it can lend to the next nation. That’s in doubt with Russia occupying parts of Ukraine, output forecast to shrink by one third this year and slices of the economy like factories and ports destroyed.

The Washington-based IMF announced last month that Kozack would become a deputy director for Europe, without mentioning her role on Ukraine. An IMF spokesperson last month called her move to the new department a routine institutional rotation of senior staff.

Leadership on negotiations can vary between the department director, deputy director and mission chief depending on the country concerned. On a top priority like Ukraine, IMF Managing Director Kristalina Georgieva also is likely to be involved at some point in the political decisions.

Kozack, 50, spent much of her career before Argentina on Europe. She was moved to the Western Hemisphere department and tasked with Argentina in late 2019 as incoming president Alberto Fernandez said that the South American nation would seek to renegotiate its $57 billion loan, the largest granted by the IMF to date, putting repayment in doubt.

She then led the IMF team in agreeing to a new deal for the $44 billion left to disburse from Argentina’s prior program.

Kozack, who earned a doctorate in economics at Columbia University and has worked at the IMF for more than two decades, also previously worked on the fund’s support of Iceland after its 2008 financial collapse, and served in posts relating to Russia, Poland, Lithuania and Germany, according to her LinkedIn profile.