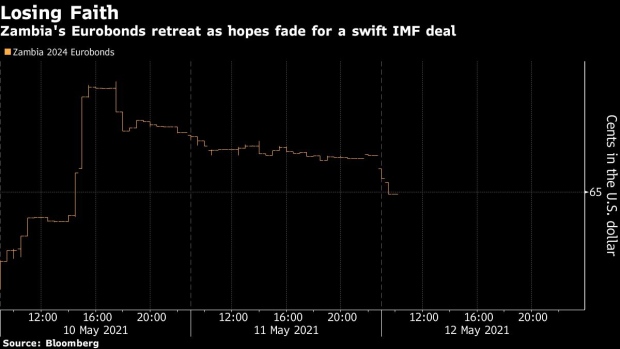 The International Monetary Fund (IMF) headquarters in Washington, D.C., U.S., on Saturday, April 3, 2021. The IMF next week will upgrade its forecast for global economic growth, driven by improved outlooks for the U.S. and China, while warning of high uncertainty and new virus strains that threaten to hold back the rebound. Photographer: Samuel Corum/Bloomberg , Bloomberg

(Bloomberg) -- The International Monetary Fund wants Zambia to implement agreed policies before resuming talks on a long-awaited economic program that has held up debt-restructuring talks with external creditors.

That’s dealt a blow to bondholders’ hopes for an agreement before general elections in August in the country that became Africa’s first pandemic-era sovereign default last year.

An IMF bailout will be crucial for Zambia before it can reach a restructuring agreement with the holders of as much as $12.74 billion in external public debt. The government will probably only be willing to implement reforms after the elections, and talks over a deal may drag on until the end of the year, Michael Kafe, an economist at Barclays Plc in London, said in a note to clients Tuesday.

Both the fund and Zambia’s Finance Minister Bwalya Ng’andu had said they hoped to reach agreement over an extended-credit facility ahead of the polls. The nation’s Eurobonds had advanced to the highest levels in more than a year in May, also buoyed by record prices for copper that Zambia depends on for more than 70% of its export earnings.

Zambia’s $1 billion in Eurobonds due 2024 fell 0.15% on Wednesday in a second day of declines. The premium investors demand to hold the country’s dollar bonds rather than U.S. Treasuries has widened 32 basis points in the past two days to 2,549, the highest level of any developing nation bar Lebanon and Venezuela.

Zambia and the IMF had separately announced the end to the latest round of talks on Monday, with the finance ministry saying they would resume discussions “at the appropriate time.” Both said they’d made significant progress on agreeing what policy measures are needed. The Finance Ministry has yet to reply to Bloomberg’s emailed questions.

Energy and farm subsidies have been a sticking point in the past. The government hasn’t increased fuel prices since the end of 2019, even as the kwacha currency depreciated by 37% against the dollar, making imports more costly and causing sporadic shortages this year. Zambia effectively increased fuel subsidies when it removed import duties on gasoline this year.

A record corn harvest the Agriculture Ministry announced last week could also put more pressure on the government to buy more stocks of the staple food from farmers ahead of the elections, who have already been lobbying for a higher price. That could further widen the budget deficit, which reached 14.4% of GDP last year.