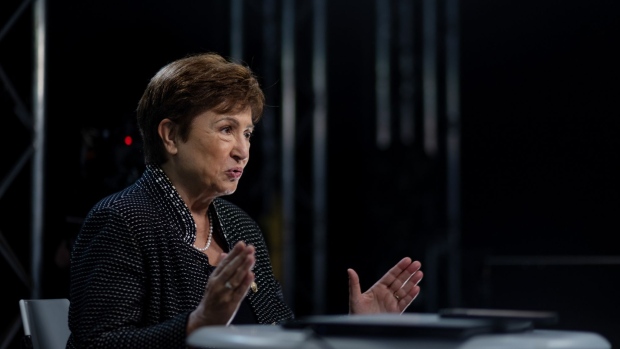 Kristalina Georgieva, managing director of the International Monetary Fund (IMF), speaks during a Bloomberg Television interview at the COP26 climate talks in Glasgow, U.K., on Tuesday, Nov. 2, 2021. Climate negotiators at the COP26 summit were banking on the world’s most powerful leaders to give them a boost before they embark on two weeks of fraught discussions over who should do what to slow the rise in global temperatures. , Bloomberg

The International Monetary Fund warned against global economic fragmentation as a consequence of Russia’s invasion of Ukraine, saying that undoing decades of integration will make the world poorer and more dangerous.

Georgieva made the comments in a blog post with Gita Gopinath, the fund’s first deputy managing director, and Ceyla Pazarbasioglu, the head of the strategy, policy and review department, ahead of the World Economic Forum in Davos, Switzerland this week.

Countries should diversify imports to secure supply chains and reduce output losses from interruptions, they said. The Group of 20 biggest economies also should improve its common framework for dealing with debt restructuring to help deal with vulnerabilities, the officials wrote.

“The costs of further disintegration would be enormous across countries,” they said. “And people at every income level would be hurt -- from highly paid professionals and middle-income factory workers who export, to low-paid workers who depend on food imports to survive. More people will embark on perilous journeys to seek opportunity elsewhere.”

Bloomberg Economics last week released the results of a simulation of what an accelerated reversal of globalization might look like in the longer term. It points to a significantly poorer and less productive planet, with trade back at levels before China joined the World Trade Organization. An additional blow: inflation would likely be higher and more volatile.

Cross-border payment systems should be modernized, with countries working together to create a public digital platform for handling remittances to reduce cost and improve safety, the IMF officials wrote. And nations must collaborate to confront climate change, they said.