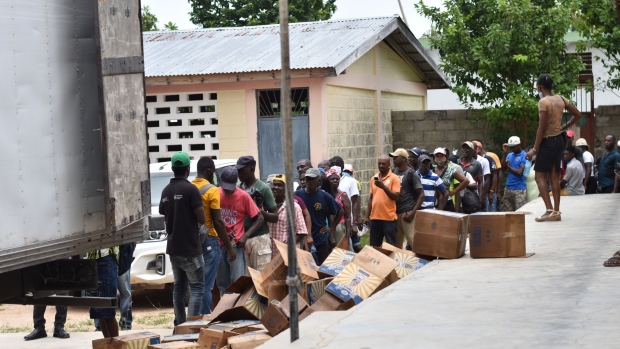 About 60% of the world’s poorest countries are at high risk or are already in debt distress, double the share in 2015, IMF Managing Director Kristalina Georgieva and Ceyla Pazarbasioglu, head of the fund’s strategy, policy, and review department, said in a blog post Thursday.

With the Group of 20’s debt-service suspension initiative expiring at the end of the year and interest rates poised to rise, “low-income countries will find it increasingly difficult to service their debts,” the IMF officials said. “We may see economic collapse in some countries unless G-20 creditors agree to accelerate debt restructurings and suspend debt service while the restructurings are being negotiated.”

Covid-19 has dealt a major blow to world’s poorest countries, causing a recession that could push more than 100 million people into extreme poverty, according to the World Bank. The challenges are mounting with the discovery of the omicron variant, which is driving a new wave of infections.

Afghanistan and Ethiopia are among the 30 nations at high risk of overall debt distress while Grenada, Mozambique, Republic of Congo, Sao Tome and Principe and Somalia are already experiencing it, according to the World Bank’s website.

Georgieva and Pazarbasioglu called for the G-20’s so-called common framework -- a plan to reorganize loans -- to be “stepped up” to help poorer nations. The strategy has been plagued by delays and a lack of interest from debtor countries since its inception in November 2020. Only three of the 73 eligible countries -- Chad, Ethiopia and Zambia -- have applied for the program.

The expiration of the debt-service relief will force “participating countries to resume debt service payments,” the IMF officials said. “Quick action is needed to build confidence in the framework and provide a road map for helping other countries facing increasing debt vulnerabilities.”