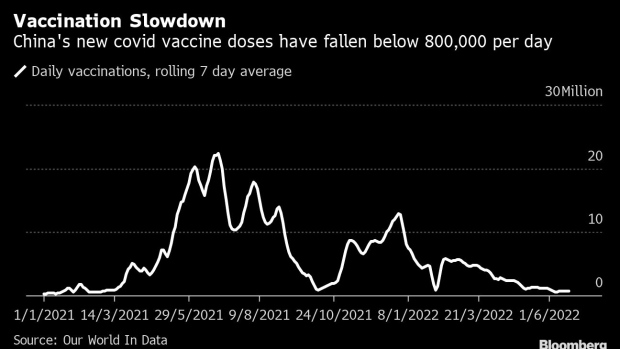 A healthcare worker prepares a dose of Sinovac Biotech Ltd. Covid-19 vaccine at a community vaccination center in Hong Kong, China, on Sunday, Feb. 27, 2022. The city is battling to contain an outbreak of the omicron variant of the virus that has strained its healthcare system, and raised questions about its Covid Zero strategy. Photographer: Justin Chin/Bloomberg , Bloomberg

(Bloomberg) -- The International Monetary Fund called on China to accelerate its coronavirus vaccination program, warning the sharply slowing pace of new doses administered could undermine a recovery in consumer spending in the economy.

At the current pace, providing three doses of Covid vaccines to the population would take a “matter of years,” Helge Berger, head of the IMF’s China mission, said in an interview. With spending growth yet to recover to pre-pandemic rates, partly because households are cautious about Covid infections, “an acceleration of the vaccination campaign would support confidence and ultimately consumption,” he said.

About 375 million people over the age of 15 in China have yet to receive three doses of a vaccine, while the daily vaccination rate has fallen below 800,000 per day, according to official data. Studies have shown that three doses of China’s domestic coronavirus vaccines were nearly as effective as mRNA vaccines in preventing severe infections or deaths.

The low rate of full vaccination, particularly among elderly people, is one of the reasons China is persisting with its strict Covid Zero policy requiring limits on activity wherever virus cases occur. Only about 64% of Chinese people over 60 have received three doses, according to China’s national health commission.

Berger said the lockdowns in Shanghai and dozens of other cities since March are a key reason the IMF sees “downside risks” to its April forecast of 4.4% gross domestic product growth for China this year.

“The second quarter will be weak given the lockdowns,” he said.

While national data has largely returned to pre-lockdown levels, Berger added that in Shanghai, measures of economic activity monitored by the IMF have recovered only to around 50%.

Read more: Even Without a Lockdown, Beijing’s Economy Struggled in May

Economists surveyed by Bloomberg predict growth of 4.1% in China this year and a possible contraction in quarter-on-quarter GDP in the April-June period. That makes it unlikely the government will meet its full-year target of around 5.5%.

The IMF has consistently called on Beijing to increase fiscal support to households. Even taking into account measures announced since April, China’s fiscal stimulus this year is smaller relative to 2020, Berger added.

“The known fiscal measures this year are still small relative to 2020, even taking into account that in 2020 the overall shock was larger than this year,” he said.