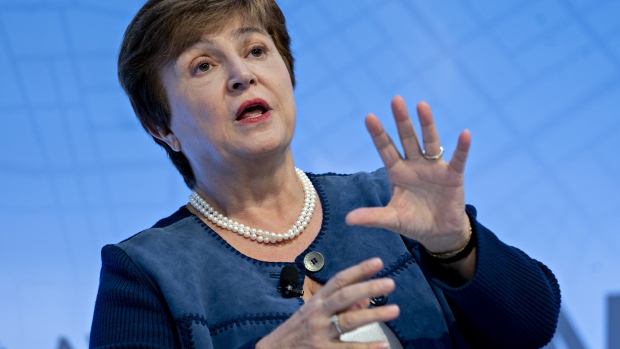 Kristalina Georgieva, managing director of the International Monetary Fund (IMF), speaks at a discussion during the annual meetings of the IMF and World Bank Group in Washington, D.C., U.S., on Wednesday, Oct. 16, 2019. The IMF made a fifth-straight cut to its 2019 global growth forecast, citing a broad deceleration across the world's largest economies as trade tensions undermine the expansion. , Bloomberg

The IMF’s new managing director, Kristalina Georgieva, put climate change high up on the agenda at this year’s annual meetings in Washington, saying the fund is getting ready to incorporate environmental risk into its economic analysis.

“The IMF is gearing up very rapidly to integrate climate risks in our surveillance work,” she said. “When we are working in countries that are either big emitters of carbon, and therefore need to transition, or are at high risk of carbon shocks, there is no way to address the fundamentals of their economies without looking at these climate risks.”

Integrating climate change into its assessments would help the IMF understand the challenge at hand and create incentives for moves in the right direction, according to Nick Stern, chair of the Grantham Research Institute on Climate Change and the Environment. The IMF’s surveillance of different countries culminate in ‘Article IV’ consultations, where a team of economists visits a country to discuss economic and financial developments.

Scared Central Banks Face Up to Threats From Climate Change

The fund is already incorporating environmental factors into its analysis of higher-risk countries and would like to make it routine, Georgieva said. Her comments -- while speaking on a panel about central banks and climate change Wednesday -- come as a global political movement against global warming is gaining steam. An IMF report published last week called climate change a crisis that requires immediate action from all levels of government.

Central banks have increasingly entered the debate, particularly through their membership of the Network for Greening the Financial System, which promotes sustainable growth. As part of its work for the group, the Bundesbank will publish a handbook on the role of monetary authorities in fostering the greening of financial markets at the meetings this week.

Asked whether central banks are ready to tackle climate-related challenges, Georgieva said that most agree on the need for disclosure and stress testing for environmental risks. How much central banks can actually use their tools to foster green investments and whether disclosure should be mandatory are more controversial areas, she said.

Georgieva’s predecessor, Christine Lagarde, has also pledged to make climate change a core part of her work as President of the European Central Bank, a job she starts at the beginning of November.

Asked whether climate-related risks were really within the ECB’s mandate, Chief Economist Philip Lane said “to deliver our core mandate, we absolutely have to be involved,” highlighting that weather shocks are already an important source of economic volatility in Europe.

“This is now a category of risk that absolutely needs to be front and center in our work,” Georgieva said. “The criticality of addressing climate change for financial stability, for making sure that we can have sustainable growth, is so very clear and proven today that no institution, no individual can stand back from the responsibility to act.”

To contact the reporter on this story: Jill Ward in London at jward98@bloomberg.net

To contact the editors responsible for this story: Fergal O'Brien at fobrien@bloomberg.net, Robert Jameson, Tony Czuczka