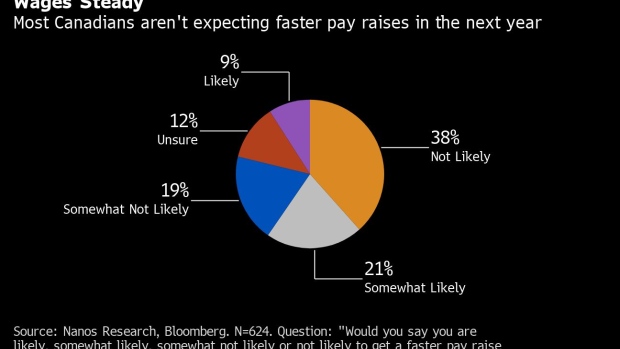 A worker picks blueberries on a farm in Delta, British Columbia, Canada, on Wednesday, Aug. 4, 2021. British Columbia's Agriculture Ministry said growers can buy insurance to cover crop yield with a 20 per cent deductible as part of a joint program with the federal government for the loss of fruit and some plants damaged by weather, such as last month's extreme heat wave, CTV News reports. Photographer: James MacDonald/Bloomberg , Bloomberg

(Bloomberg) -- For those debating if the way to fill millions of job openings in the U.S. is to open the doors again to immigrants, a glance north of the border is illuminating.

Canada, unlike the U.S., quickly started welcoming foreign workers and students again after a brief pandemic halt in what is part of a years-old, pro-immigration policy that’s provided its economy with a much more work-ready labor force.

In the five years through 2020, about 1.9 million newcomers came to the country, up from 1.2 million the previous five years. The U.S., nine times the size of Canada, saw its net flow of immigration drop to about 3.8 million over that time, from 4.5 million.

The results are simultaneously terrific and problematic: Companies have been filling job postings at a breakneck clip, pushing payrolls back above pre-pandemic levels and allowing them to ramp output back up. But workers, with fewer labor shortages acting as leverage, are scoring tiny wage increases -- currently running at 2% on average -- that leave them poorer after inflation of almost 5% is factored in.

There has been a “surge in Canadian prime-aged population,” says Avery Shenfeld, the chief economist at Canadian Imperial Bank of Commerce. These new immigrants, he says, are “less likely to say ‘shove it’ to work in sectors where shortages are most acute.”

The differences in immigration policy between the two countries today are so stark that it’s almost as if they were running some sort of economic experiment.

In the U.S., which has orchestrated a sharp drop in immigration, the labor-market dilemma is the inverse: Workers are scoring the biggest pay hikes in decades -- nearly matching soaring inflation -- at the same time that employers can’t find enough staff to operate at full capacity, hamstringing the economic expansion.

In Ottawa, the bet for Justin Trudeau’s government is that the formula of more immigration and more job creation will help quell inflationary pressures and create the kind of even and long-lasting recovery that makes Canadians forget about how they lost a chunk of purchasing power in 2021.

The weaker trajectory in the U.S. reflects more restrictive policies that began under Donald Trump’s administration.

Canada, meanwhile, is remaining ambitious with its approach to newcomers. After seeing immigration levels fall by more than half last year because of the pandemic, Trudeau’s government is planning to fully offset that decline by ramping up  targets in the future.

International students are already beginning to pour in again. Canada issued about 354,000 study permits to foreigners in the first nine months of the year, up 63% from the same period in 2020.

“Targeting a pool of talent that exists globally to fill gaps in the Canadian labor force has to be part of the strategy,” Sean Fraser, Trudeau’s new immigration minister, said in an interview last week.

Of course, immigration isn’t the lone factor holding down wages in Canada.

Canada’s relatively strong social safety net -- from universal health care to more accessible public child care -- also supports higher participation rates, particularly in the middle of a pandemic. Its relatively high unionization rate, at about 30% of employed workers versus 10% in the U.S., may also be a factor. Most union workers are bound to three-to-five year contracts, meaning they have no immediate recourse to offset higher prices.

Investors aren’t even convinced Canada’s softer wage picture will hold. With markets pricing in five rate increases over the next year, investors are betting wage pressures will mount and the Bank of Canada will have little tolerance for it. Some economists are already detecting some early signs of wage gains in recent months.

But survey data on household expectations will give policy makers some comfort.

A hybrid phone and online poll by Nanos Research Group for Bloomberg News earlier this month showed that only 30% of working Canadians anticipate faster pay raises over the next 12 months, with 57% not expecting any acceleration in wage growth and 12% unsure. Most Canadians, it seems, aren’t expecting any relief from higher inflation.

And while climbing back to pre-pandemic employment levels is a significant milestone, not all economists are doing a victory lap.

“Much of that surge seems to be attributable to recent newcomers picking up jobs in sectors with low pay,” says Armine Yalnizyan, a research fellow at the Atkinson Foundation. “So are Canadian workers really better off?”