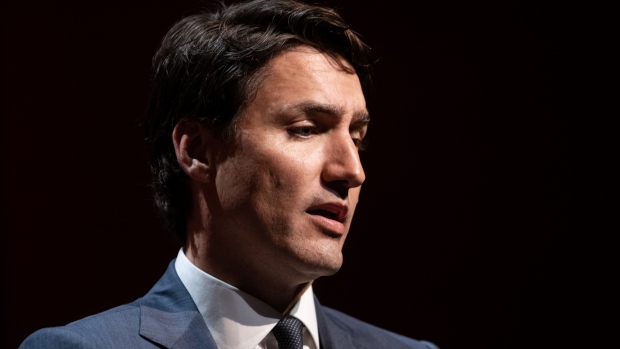 Justin Trudeau’s latest headache is unusual for a country bounded by three oceans and just one neighbour: the border.

Canada has seen a steady flow of asylum seekers since Donald Trump’s election, with people who fear the U.S. will deport them or reject their bids for asylum crossing the 4,000-mile undefended border and filing a claim. While the total numbers are relatively modest, the influx has strained resources and prompted calls for more funding.

The issue has the Canadian prime minister caught between demands for tighter security and his own pledge of open arms. The controversy has ramped up in recent weeks, in part because of Ontario’s election of a conservative government led by populist Doug Ford. He and two other premiers have called on Trudeau to act, and a political sparring match is underway over what values are more Canadian: welcoming refugees, even those arriving illegally, or securing the border?

Trudeau moved to quiet the storm last week by naming Bill Blair, a former police chief, as minister for border security. “When conservatives across the country are playing the fear card, we need strong, reassuring voices to counter that,” the prime minister said Wednesday after shuffling his cabinet. He warned that his rivals have begun “a very dangerous game” by “pitting Canadians against each other and raising the kinds of anxieties that quite frankly don’t help solve problems.”

Canada and the U.S. have signed a Safe Third Country Agreement, which means they generally don’t accept refugee claims already being made in the other nation. But there’s a hitch: Someone who enters Canada anywhere other than a regular border crossing, such as an airport, can make a claim, even if the act of crossing is illegal.

The issue is most prominent in Quebec, where it’s been percolating for 18 months. A makeshift processing center has even been built in the French-speaking province, at a border crossing that had been little more than a dirt path through a ditch.

The Royal Canadian Mounted Police arrested waves of people as they exited taxis, dragged out luggage and crossed over from New York state. Last August, more than 5,700 people were arrested crossing illegally into Canada -- nearly all in Quebec, where at one point Montreal’s Olympic Stadium was commandeered to help handle the influx. But this year, the arrest average has been about 1,800 per month nationwide. The province has nonetheless asked Ottawa to speed up processing times for asylum claims and warned it won’t ensure housing to an unlimited number of migrants.

“These days, it’s contained,” said Jean-Pierre Fortin, head of the Customs and Immigration Union, which represents border workers and has been pressing the federal government for more resources. “If we get a spike like we got last year, that’s where we do have some major concerns.”

Despite that, the rhetoric is becoming heated. A meeting of Canada’s immigration ministers this month saw Trudeau’s lead on the file, Ahmed Hussen, criticize those who conflate regular immigration with asylum seekers as “not Canadian.” Ford’s immigration minister, Lisa MacLeod, fired back and demanded Hussen apologize. “There is a problem at the border, the border must be enforced,” she said, according to the Canadian Broadcasting Corp. “Ontario should be made whole for all of the costs that we have incurred.”

Government data show her province hasn’t had any illegal crossers detained all year, but some claimants are moving to Ontario. The country’s federal Conservative Party, which governed from 2006 to 2015, has called the situation a crisis, but recently pulled an attack ad that showed a black man crossing into Canada over the text of a tweet from Trudeau welcoming refugees.

The premiers of Quebec and Manitoba -- which, largely due to geography, received the most illegal crossers last year -- joined Ford in confronting Trudeau last week. The trio issued a statement calling on the prime minister to “allocate the necessary resources to ensure the security of Canada’s borders as part of a comprehensive, long-term plan” and to compensate provinces for services provided to asylum seekers.

Canada admits roughly 300,000 immigrants per year under several categories, such as skilled workers. Trudeau champions that -- and conservatives say that’s part of the problem. The tweet featured in the pulled ad, which the prime minister sent shortly after Trump’s inauguration, was seen to have left a false impression that all claims are accepted, when in fact the country deports those whose refugee claims it doesn’t deem legitimate.

“To those fleeing persecution, terror & war, Canadians will welcome you, regardless of your faith. Diversity is our strength,” Trudeau wrote at the time. His government later dispatched lawmakers into certain U.S. communities to get the word out about what the rules actually are, while it scrambled to deal with an influx at the border.

Voters are uneasy about the illegal crossers, often referred to as “irregular” migrants, because they are legally entitled to make a claim even though the physical act of crossing a border like that is a crime. An Angus Reid poll released in September, just after the number of crossings peaked, found 53 per cent of Canadians thought the country was being too generous to people who cross the border illegally. For past conservative voters, the number was 75 per cent.

“Governments all around the world have to figure out how to respond when numbers go up and down. Canada has not always been that great at it,” Janet Dench, head of the Canadian Council for Refugees, said in an interview. “It’s like responding to fires -- you don’t get to plan how many fires you have or on what day of the week.”

In too many countries abroad, politicians demonize refugees for political gain, she said, calling it “a very immoral thing to do, because you’re picking on extremely vulnerable people.” Dench added: “We’re very anxious that Canada can continue to be a country where politicians know that you’re not going to win votes by attacking refugees.”

--With assistance from Sandrine Rastello