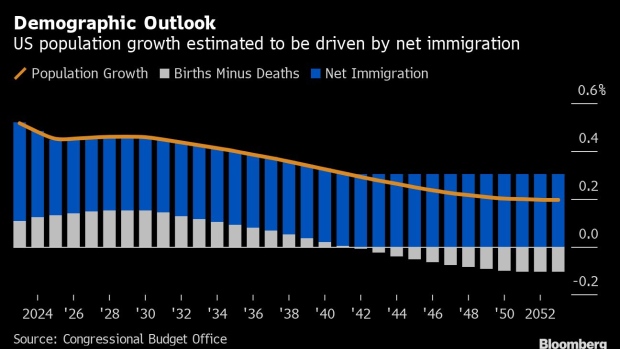 (Bloomberg) -- US population growth will be driven entirely by immigration within two decades, according to the latest forecasts by the Congressional Budget Office.

The projections, published on Tuesday, show a population of 373 million by 2053 — about 3 million more than the CBO was expecting a year ago. That’s partly due to a sharp increase in the forecast for immigration in 2023 and the following two years, after pandemic travel restrictions eased — adding some 1 million to the population over that period.

At a time when many analysts have focused on demographics as a potential drag on the US economy, the higher forecast offers some encouragement. Much of the growth is projected to come in the so-called prime-age bracket, between 25 and 54, that is the core of the workforce. The CBO expects that cohort to increase by about 1.1 million people, or 0.9%, each year.

Still, by 2042 deaths in the existing population are expected to exceed births, meaning only immigration will expand the population.