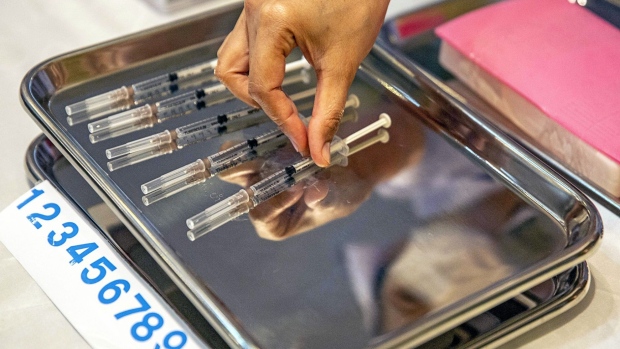 A nurse places a syringes containing doses of the AstraZeneca Covid-19 vaccine on a tray at the Bamrasnaradura Infectious Diseases Institute in Nonthaburi, Thailand, on Friday, March 12, 2021. Thailands Health Ministry said that the nation would temporarily halt the use of AstraZeneca Plc vaccines until theres more clarity from the investigations of possible blood clots. The Prime Minister Prayuth Chan-Ocha and some of his cabinet members who were scheduled to get their AstraZeneca shots today have postponed their appointments after suspensions of the vaccine in some European countries, including in Denmark, Italy and Norway. Photographer: Bloomberg/Bloomberg , Photographer: Bloomberg/Bloomberg

ImmunityBio Inc., the U.S. company controlled by biotech billionaire Patrick Soon-Shiong, is planning to conduct a trial for a second Covid-19 shot in South Africa.

ImmunityBio is already running local trials of an earlier dose, known as the hAd5 T-cell vaccine, and will test it as a booster for South African healthworkers who have received Johnson & Johnson’s vaccine.

The new program’s co-ordinators “will likely start enrolling by mid-November, contingent on getting the necessary approvals” from the South African Health Products Regulatory Authority and the trial’s ethics committee, said Shabir Madhi, a vaccinologist at Johannesburg’s University of the Witwatersrand, who will be running the process.

While drugmakers around the world have produced billions of approved Covid-19 vaccines to roll out across the globe, many international pharma companies such as ImmunityBio have turned their attention to second-generation doses that could be used to fight future coronavirus variants and potentially deadly new waves.

South Africa has been the site of a number of trials already, carried out by Pfizer Inc., AstraZeneca Plc, Johnson & Johnson, Novavax Inc. and Sinovac Biotech Ltd. Madhi ran both the AstraZeneca and Novavax initiatives.

The new vaccine is expected to bolster the production of both antibodies and T Cells that kill virus-infected cells.

“We hope that this then solves the problem of high antibodies and durable immunity,” Soon-Shiong said, adding that the trial will initially encompass the first two phases of the three-stage path to approval for emergency or general use.

At a later stage, ImmunityBio may also run a trial of a so-called subunit protein Covid-19 vaccine, Soon-Shiong said. Subunit vaccines use fragments of viruses to stimulate an immune response.