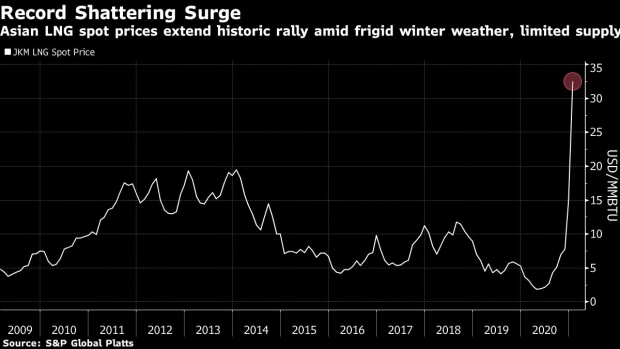 (Bloomberg) -- The historic surge in Asian liquefied natural gas prices is poised to soon end as frigid winter weather subsides. Its impact could linger all year.

The past few weeks of abnormally low temperatures across North Asia, home of the biggest LNG consumers, will force the region’s end-users to restock supplies, providing support for price benchmarks throughout 2021. What was expected to be a finely balanced summer just a month ago, is now looking increasingly tight, according to Wood Mackenzie Ltd.

“The cold spell will have long-lasting implications throughout the year,” said Massimo Di-Odoardo, a vice president at the consultant firm. “That is going to pave the way for restocking demand very much across North Asia. Total available LNG to Europe will in turn be lower.”

A harsh winter has upended energy markets and caught some utilities flat-footed, sending prices for electricity, fuel and vessels to record highs. The Japan-Korea Marker, Asia’s benchmark for the fuel, surged to $32.494 per million British thermal units on Tuesday, a 18-fold rise from April’s record low and the highest since S&P Global Platts began assessments in 2009.

That rally is poised to peak this week as the February contract expires on Friday. Spot prices will roll to the March delivery contract, which is trading at half the previous month’s rate, mainly because the cold spike and supply tightness are expected to ease by then. This will make it appear that the JKM benchmark fell by a significant amount on Monday, when March becomes the front contract.

Asian LNG prices will soon begin to fall, and end up averaging $7.6 per million Btu in 2021, nearly double last year’s rate, according to WoodMac. Dutch prices, a European benchmark, are seen rising 75% to $5.6 this year.

More LNG suppliers are diverting cargoes from Europe to Asia to take advantage of the higher prices. Storage levels in Europe are already more than 15 billion cubic meters lower than last year, according to WoodMac. And higher coal and carbon prices, also partially driven by frigid weather, will provide headroom for more summer gas demand in Europe, the consultancy added.

Already, the end of Asia’s cold blast is in sight. “The big cold seen in recent weeks in Northeast Asia will be over by next week, as milder temperatures return and the focus of the most anomalous cold shifts to northern Europe,” said Todd Crawford, lead meteorologist with the Weather Co., an IBM business. “The period from late-December through mid-January will likely end up as the coldest three-week stretch observed in more than a decade.”