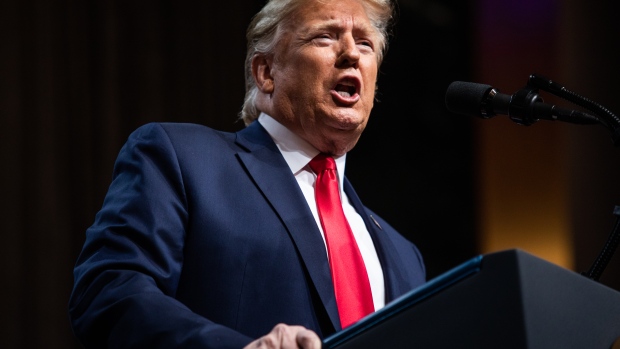 Public impeachment hearings in Congress about President Donald Trump’s attempts to pressure Ukraine are likely to have scant influence on markets, some analysts said on Wednesday.

“These hearings will be the height of drama inside the beltway, but our sense is that the market impact will be negligible given that Senate conviction remains highly unlikely,” Compass Point analyst Isaac Boltansky wrote in a note. AGF Investments strategist Greg Valliere concurred, writing that “there’s little for investors to worry about; the markets ignored Robert Mueller and they will ignore impeachment.”

Valliere listed things that are more important, including: Earnings, gross domestic product and interest rates, adding that he expects Federal Reserve Chairman Jerome Powell to make clear in his testimony -- also before Congress on Wednesday -- that the “central bankers aren’t inclined to cut rates any time soon, surely not in December.”

Valliere’s advice to investors listening for news from the impeachment hearings was to “try to filter out the noise, which will be deafening,” and offered a “spoiler alert: The Senate will acquit.”

Boltansky added that early in the impeachment inquiry, “domestic policy volatility” may have helped edge Trump toward becoming more conciliatory regarding China. Compass Point believes a Phase 1 agreement with China will be reached in 2019 that suspends tariffs scheduled for mid-December, boosts Chinese agricultural purchases, “cursorily” addresses some intellectual property issues, and “sets the stage for unwinding the remaining tariffs.”

Even so, Boltansky cautioned that a “Phase 1 deal should be viewed as little more than a détente” as the issues involved, and political pressure, are set to ramp up.

U.S. stocks on Wednesday morning stalled near all-time highs as investors saw few reasons to pile in after a furious five-week rally. The S&P 500 fell about 0.1%.