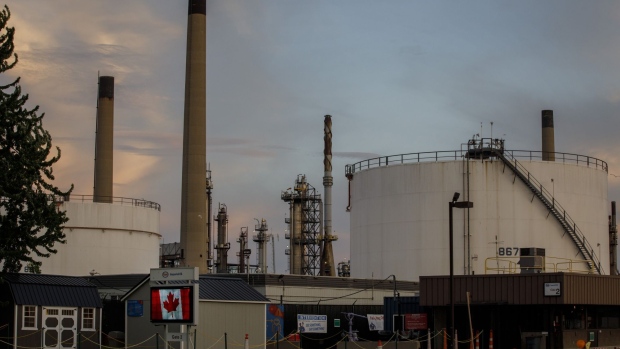 An Imperial Oil Ltd. refinery near the Enbridge Line 5 pipeline in Sarnia, Ontario, Canada, on Tuesday, May 25, 2021. , Photographer: Cole Burston/Bloomberg

Imperial Oil is among five energy companies that UBS Asset Management (UBS AM) has dropped from its Climate Aware funds.

That includes one it manages for the £20.9-billion ($35.8-billion) Nest pension plan, and its actively managed equity and fixed income sustainability funds.

In a statement Monday, UBS AM and Nest said Imperial, along with parent company Exxon Mobil Corp., Kepco and Marathon Oil and Power Assets have shown a lack of progress in managing climate change risk.

Nest’s ownership in the five companies represented £40m ($68 million), or 0.25 per cent of Nest’s total portfolio, as of the end of June. Its new climate targets include slashing the investment carbon footprint of key assets 30 per cent by 2025 and to have its entire investment portfolio aligned with limiting global warming to 1.5 degrees Celsius above pre-industrial levels by 2050.

“At Nest we aim to work with companies to encourage sustainable business decisions but will draw the line somewhere,” said Katharina Lindmeier, Nest’s senior responsible investment manager, in a release. “The five companies being excluded have not done enough to convince us that we should remain shareholders.”

Nest said the five will not return to its main portfolio “until they demonstrate clear progress in preparing for the low carbon economy, in order to deliver good investment value for its savers.”

This action follows a multi-year engagement program UBS AM led as part of its climate aware framework. It says 49 oil and gas companies were identified as lagging on climate change performance.

“Our three-year engagement programme provided companies with time to understand our concerns and act on them,” said Francis Condon, head of thematic engagement and collaboration at UBS Asset Management. “We have seen positive progress from most companies in the program on their climate strategy and transition to a lower carbon economy. However, where we have not seen tangible progress, we are taking action.”