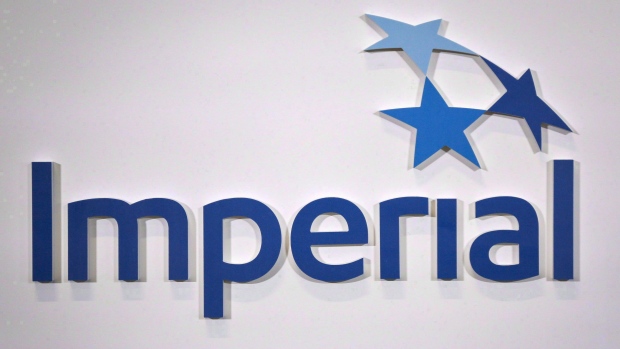 The Imperial Oil logo as seen at the company's annual meeting in Calgary, Friday, April 29, 2016. , The Canadian Press

CALGARY -- The restart of crude oil production at Imperial Oil Ltd.'s Norman Wells oilfield after a two-year shutdown means both economic optimism and cleaner air for the 800 or so residents of the remote Northwest Territories town.

"So we're absolutely delighted that they're back on line."

Imperial announced Monday that an employee-contractor workforce of about 100 had restored oil operations, adding it plans to gradually increase output to about 10,000 barrels per day, about the same level it was at before being shut down in December 2016.

Production was halted after slope stability concerns at the Mackenzie River crossing near Fort Simpson led to Enbridge Inc. suspending its 870-kilometre Line 21 pipeline that extends from Norman Wells into northern Alberta.

After receiving regulatory approval, replacement work on a two-kilometre section of the pipeline began in May and was completed in September.

The resumption of production means Imperial will resume supplying Northwest Territories Power Corp. with surplus electricity from its power plant, it said. The plant is fuelled by natural gas produced with the oil from its wells.

The electricity is expected to allow the power company to withdraw diesel-fuelled generators it employed to bolster power capacity while the oilfield was off line, Flynn said.

"They (diesel generators) make quite a bit of noise and, of course, you get the exhaust that comes off of it," he said.

"It's my understanding that (Imperial) is burning off natural gas in order to produce their's, so that definitely is a cleaner way to generate electricity than using diesel."

Imperial had identified its Norman Wells oilfield as a non-core asset and was trying to sell it prior to the shutdown. In an email, spokeswoman Lisa Schmidt said it is still considered to be on the market.