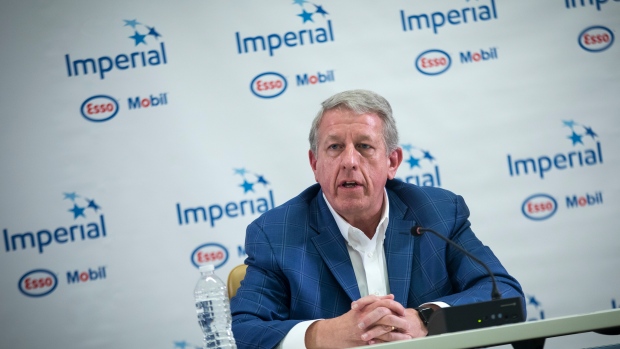 Imperial Oil President and CEO Brad Corson answers questions at a news conference, as he is taking over from outgoing President and CEO Rich Kruger in Calgary, Wednesday, Dec. 4, 2019. , THE CANADIAN PRESS/Todd Korol

EDMONTON - Alberta has 162 new cases of COVID-19, the highest single-day report to date, and two more residents in long-term care homes have died.

Dr. Deena Hinshaw, the province's chief medical officer of health, says one of the victims was a resident in the Manoir du Lac retirement home in northern Alberta and the other was in a care centre in High River.

Fifty people in Alberta have died so far from the novel coronavirus, and the total number of cases has reached 2,158.

The deaths include 32 residents in care centres, and officials have been tracking outbreaks in 22 of these facilities.

Officials are also tracking outbreaks at the Kearl oilsands work camp north of Fort McMurray and at the Cargill meat packing plant in High River.

Imperial, which owns Kearl along with ExxonMobil Canada, said as of Thursday it had two active COVID-19 cases on site, and 10 active cases away from the site.

Simon Younger, vice-president of production at Imperial, said the company has completed contact tracing for these individuals and has asked other workers to self-isolate while further testing is underway.

Hinshaw said the province's data collection centre had a small electrical fire earlier this week and that has delayed getting detailed breakdowns of those outbreaks.

She also said seven staffers at Calgary's Foothills Medical Centre maternity ward were confirmed last week to have COVID-19. But she said there have been no new cases since, and no patients have been affected.

“There is no increased risk to pregnant patients coming to the Foothills Medical Centre.”

Hinshaw said Cargill officials have increased physical distancing among employees and slowed down its production line to improve health safety.