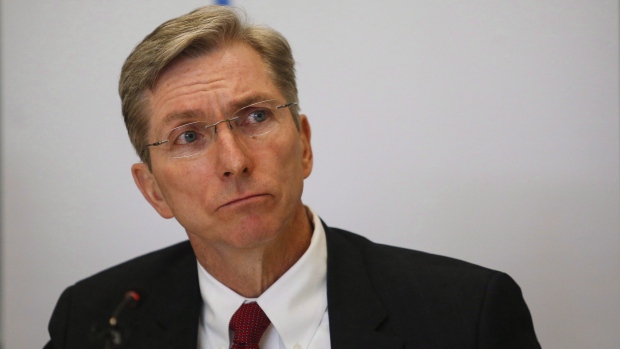 Rich Kruger, president and CEO of Imperial Oil, listens to a questions as he speaks to the media following the company's annual meeting in Calgary, April 29, 2016.

But the company has little interest in buying $3.7 billion in rail contracts the provincial government is trying to unload because the market is too volatile to count on for the longer term, Kruger told reporters after Imperial's investor day in Toronto.

"The challenge through the year on the rail is it's been a roller-coaster. It's up and down. Some months it's in the money, some months it's not, it's been very difficult to predict," he said.

"When you ramp up a rail operation, it's not a switch, you can't flip it on and off."

Imperial signalled during its third-quarter results call two weeks ago that shipments from its 210,000-barrel-per-day rail terminal in Edmonton could continue to fall after slipping from 76,000 bpd in July to 35,000 bpd in September.

Kruger said the economic case for shipping oil by rail worsened over the summer because there wasn't enough difference in price between Alberta and the U.S. Gulf Coast end market to support rail, which is considered more expensive and less safe than pipeline transport.

On Tuesday, he said the Keystone outage has caused oil storage inventories to rise in Alberta, leading to a steeper discount to U.S. prices and making rail more attractive. (The pipeline was restarted at lower pressure on Sunday after leaking about 9,000 barrels of oil.)

Imperial's sanctioning of the $2.6-billion Aspen oilsands project, which would have used steam and solvents to produce 75,000 barrels of bitumen per day from wells, surprised observers when it was announced at last year's investor day but there was no such surprise at this year's event.

Instead, Kruger, who is retiring at year-end, said it will remain on the sidelines until the province completely ends its oil curtailment program put in place by the previous NDP government to support prices.

The measure was continued by the United Conservative government when it was elected last spring, although allowable production has gradually been increased. The new government has also said it will soon announce results of its plan to sell off rail contracts signed by the NDP.

Imperial did, however, announce a $450-million project to boost output from its four-decades-old Cold Lake thermal project in northeastern Alberta by drilling into the previously undeveloped Grand Rapids underground oilsands formation.

Imperial says the project will save about $1 billion in capital spending by replacing its previously proposed 55,000-bpd Cold Lake expansion project.

The new plan involves diverting steam from its nearby underperforming Nabiye project, started up in 2015, to bring on about 15,000 bpd by 2021, with new steam generation added in future phases to take production to 40,000 to 50,000 bpd.

Imperial also confirmed a plan to boost production from its Kearl oilsands mine to 280,000 bpd from the current 200,000 bpd through the addition of supplemental ore crushers and self-driving haul trucks, along with other enhancements.

Kruger said the Kearl expansion will likely require at least some use of crude-by-rail next year.