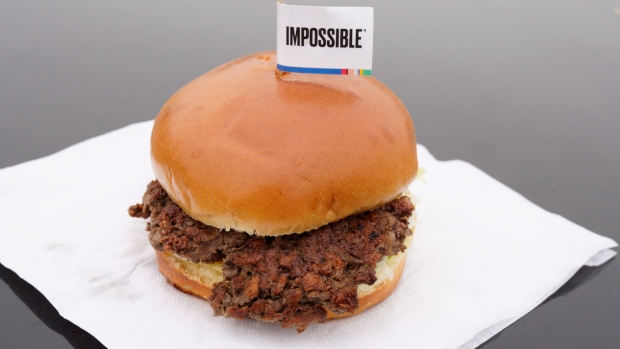 The Impossible Burger, so far only available at restaurants, could finally be making its way to U.S. grocery store shelves, giving chief rival Beyond Meat Inc. (BYND.O) a new competitor inside retail. It also announced on Wednesday plans to produce more of the meat-free patties through a new collaboration.

In response to a petition submitted by Impossible Foods, the Silicon Valley-based maker of the eponymous burger, the U.S. Food and Drug Administration has amended its rules to call the use of soy leghemoglobin safe as a colour additive in imitation beef, clearing a key hurdle in the company’s push to sell raw product inside grocery stores.

The rule change is effective Sept. 4, though petitioners still have a chance to file objections. The original petition filed in December specified that heme could “not exceed 0.8 per cent by weight” of the final product.

“Should no objections be raised, the direct-to-consumer sale of uncooked, red-colored ground beef analogue products containing soy leghemoglobin will be allowed,” the FDA said in a statement.

Soy leghemoglobin, or “heme,” is the ingredient that gives the Impossible Burger its essential meat-like flavour. Red in hue, it hadn’t previously been formally approved as a safe colour additive, meaning retailers couldn’t let individual consumers purchase the uncooked product the way they can buy and bring home raw Beyond Meat patties.

That’s meant Impossible Foods has been limited to selling inside restaurants. It’s offered at large restaurant chains Red Robin and White Castle, and it has inked a deal to be sold in all 7,300 Burger Kings nationwide by the end of the year.

“We are in the midst of a revolution in food technology that in the next 10 years will likely lead to more innovations in food and ingredient production than there have been in the past half century,” said Dennis Keefe, director of the Office of Food Additive Safety in the FDA’s Center for Food Safety and Applied Nutrition. “As these new products and ingredient sources come to the market, the FDA has a responsibility to provide the appropriate regulatory oversight to protect public health by ensuring that these new foods and food ingredients are safe.”